Skip to content
Sai Sister Anuradha Ji from India says: I am a devotee of Sai. I consider Him my Shiksha Guru. Through my worst time last year, it was Sai and my Diksha Guru’s guidance that saw me through. At a time when I found myself all alone, Sai was present as was my Guru. A few days back as I was thinking of going to Shirdi, immediately my acquaintance from Shirdi called me. I am still in a tough spot and I hope you all pray for Sai’s kripa on me. 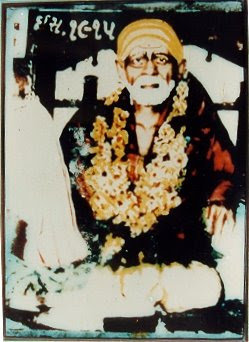 My journey with Baba started as a young child, when I would accompany my Nani and Mausi to the Sai Temple in Delhi’s Lodhi Estate. My Nani had bought me a small pendent from the temple with Sai’s image that I wore.

Then for many years my attention flickered away to other things away from Sai. When I was a teenage my aunt was diagnosed as suffering from final stage of cancer. Doctors advised her family to take her home because even the advanced surgeries she underwent could not help her. She was in a lot of pain. My father decided to visit Shirdi as he had heard of the miraculous healing powers of Sai’s UDI and water.

This was also a time our family was facing a lot of hardships by way of illnesses and strained finances. My father visited Shirdi with just his two-way ticket and a little money for his meals there. On the day, he was returning, he just had One Rupee left in his pocket. My father thought he did not need the money, since he would reach home and have food the next day and decided to fast that night. As he was waiting for the train, an old fakir came and sat next to my father. Suddenly this man started talking to my father in fluent English. Strangely, my father started telling him his troubles. As his train arrived, the fakir extended his palm in front of my father. My father took the only rupee in his pocket and gave it to him. A little later he turned to spot the Fakir and the man had just disappeared. Sai’s UDI and water helped my aunt to the extent that she did not feel any pain despite bleeding heavily every day. She was deeply happy to receive Sai’s photo. A photo was also gifted to me. That image of Sai’s likeness in Shirdi sits in my altar even now.

A few years back, I had an intense curiosity to know what Sai actually looked like. Till then, only photos of His statues were in circulation. Three days later, I saw this group mail in my inbox with a rare photo of Sai at Shirdi with His disciples. I was taken aback. My mother and sister already believed in Sai very deeply. In fact, my mother would ask for Sai’s help in simple day to day events and I used to laugh at her saying why bother God over such small things. “My Sai listens very closely to His bhakts,” my mother would say.

Then came a time, when I found love for the first time. I had been single well into my 30s. I was overwhelmed with the emotion one day while sitting with my beau and looking at Sai photograph. I felt so insecure about my relationship since it did not have our family’s approval. Suddenly the room was filled with the scent of flowers and sandalwood. Someone later said that was Sai’s presence. Anyway, a few years down the line, that person and I broke up and the relationship was over. I was distraught and deeply disturbed. Nothing held my attention; I woke up in the mornings wishing for death. Yet death eluded me.

Then one of those days I dreamt I was standing in Shirdi with my Mom in front of the Samadhi. The temple looked like it did before the renovation. I thought maybe I dreamt of it because I had spoken to my Maa about it. A few days later, I again dreamt. This time it was Baba Himself in His white kafni and headcloth. He looked old, but healthy cheerful, fair complexioned. He stood waiting for me at the threshold of a room with marble flooring. Many of His bhakts were there to see Him. Then He appeared to spot me. As if He were waiting for only me. And then He moved His arm in a gesture asking me to come on forward. Like He was saying, “Aaja, aaja”.

After that dream I felt I could not ignore the call any more, I had to go, by hook or crook. It was during Navratras last year, and everyone I asked said it was impossible that I would get a ticket. Finally after trying for two days, I got a ticket on a train that ran only on that Sunday morning, a special train. I had very little money on me and I was worried that I won’t have any left after I paid the hotel fee. So I tried to get a room in the Sai Sansthan facilities. But rooms were not available. I had made some local contacts in Shirdi through my professional links. These people then arranged for my stay in a private hotel. The room cost more than my budget. But I thought, okay I will fast on the train on my way back.
Thanks to my local contacts, I was able to have good Darshan of Baba twice a day on both Saptami and Ashtami day.

On Ashtami, I went and sat at Dwarkamai Masjid for a long time for the evening prayers. My train was scheduled to leave on Navami noon and status was Wait List 1. I expected the ticket to get confirmed. Or else I hoped to get it confirmed by my professional contacts again. On Ashtami and Navami day, we tried the whole day, but my ticket could not be confirmed despite contacting railway officials in Delhi, Mumbai and even local regional office. Finally I gave up. “Baba wants you to stay. Your time here is not up. You can’t leave otherwise there was no way your ticket would not have been confirmed,” my host told me.

He said I should now relax and stay for Baba’s palki in the evening. Suddenly my body hair stood on it’s ends. Baba’s prophecy was that I will be in Shirdi for Dusshera and I had thought how that is possible since we celebrate the festival at home. Here I was in Shirdi on Vijayadashami and I was going to witness Baba’s parikrama of the town in His Palki! My anxieties subsided and I decided to enjoy this rare opportunity. The next day, I went and offered Baba a coconut and some agarbatti with my host. We came back to his office and sat scratching our heads about getting my ticket confirmed. Unknown to us, a local shop-keeper was watching us rake our heads over this issue for the last two days. Finally, he stepped forward and said in Marathi, “Can I try to get your ticket? I know people in Aurangabad.” We all jumped at him. Again a bell went off in my head. Baba’s other prophecy, “a simple man will help you, a simple Marathi man”.

With his help, I boarded a train for Delhi that was packed beyond capacity and even found a comfortable birth. My travelling companions both to and from Shirdi were exceptionally nice, the best I had met during train journeys in many years. The relationship broke, but I think now maybe it was for the best. It was a toxic association that was making my life difficult. I lost that job as well. But as a dark chapter of your life comes to an end and you look ahead, you know something positive is unfolding. My Sai has better plans for me. I wish to be in Shirdi soon with good news for my Baba.