Sai Baba Is With All His Devotees

Anonymous Shirdi Sai Devotee from India says: For many years I was a devotee of Sai. I started believing more when I met a friend in my office and she used to share many experiences with me. After that, I got more belief in Sai and she took me to a temple where I felt some different positive vibes. I was more attached to Sai and I started feeling Sai everywhere around me and tried to ask Him everything before I did. Even I started reading Sai Satcharitra and completed it. Again joined Mahaparayan and did it continuously every week. It gives me peace of mind and makes me feel better.

I wanted to share one of my recent experiences. I got pain in my legs. Initially, I thought it was some normal pain due to loss of physical activity as I’m working from home. But gradually it started getting worse. Nights I was not getting sleep at all, I can’t explain that pain in words. I went to the doctor after a month. He gave me medicine and asked me to come after two weeks and that it should be reduced. Otherwise, he said that we need to make a few tests to find out the problem. I took medicine for one week, the pain was the same and I couldn’t tolerate it as it was raining. The winter temperature was making it worse. I took the tests two weeks ago. Every moment the only thing running in my mind was Sai. I asked Him to make everything normal. I gave blood tests, reports got delayed for a day, and tension was at a peak. I chanted the Sai Gayatri mantra and within an hour I got reports which were completely normal. The same evening I went to the doctor and showed him the reports. He told me that I was completely fine, and didn’t know why the pain was there. It could be due to loss of physical activity and iron deficiency. For better understanding, he asked me to consult a neurologist. The next day I took an appointment with a neurologist, waited for two hours as the doctor had some emergency. I prayed to Baba every second. He tested orally and after examining suggested an MRI. Once he told me about the MRI, my tension started again. I took an appointment for an MRI, they said it takes 40 minutes and it was my first time. I was scared like anything.

My dad and brother were waiting outside. My dad was tenser than me. I went inside just thinking about Sai. When the MRI started, I went inside the tunnel and the sounds of the machine started. The only thing running in my mind was Sai. I chanted Him continuously to make everything fine for my parents and family. They can’t tolerate my illness at this age. I’m the only daughter and son to them so I should be healthy and keep them happy was my responsibility.

Reports came but the time was already evening 5.30. Doctors usually leave by 4 o’clock. By Baba’s grace, the doctor was about to leave when I went with reports. He took us inside again and examined the reports. He didn’t say anything much, just smiled and said don’t take tension. Later, he said some things were not clear in images, and wanted to retake the MRI to know it perfectly. He came to the MRI room along with us, instructed the MRI room guy to take images again at a particular area. In between, he called my brother to speak, by keeping me and dad outside. This thing made me tenser. They came out after five minutes. The doctor put his hands on my dad’s shoulder and told, “Don’t worry sir, your daughter is completely fine.”

For the next MRI, the waiting time was an hour as another patient was already there. We went out to eat something and came back. Dad spoke with my brother and asked what the doctor said. Brother told us that there was nothing serious and as we both were tense the doctor had kept us outside. Everything is fine, just one doubt they wanted to clarify.

We went back and took the MRI again, already it was 8.30. I took the images and came near the doctor’s room. Again it was Baba’s grace, the previous doctor left but he told one more neurologist to wait till we come and check the reports. He took us inside, examined everything, and called the previous doctor by sending images on WhatsApp. They both decided that nothing was wrong, everything was fine. The pain was because of stress and some iron and B12 deficiency. They just gave me those medicines. This answer by them made me so much stress relieved. I was so grateful to Baba at this moment really. Only He made this everything fine and normal. His blessings are more powerful. For 40 days I hadn’t slept peacefully. Yesterday night I took tablets and slept peacefully without pain.

It was Thursday, I completed my Sai Mahaparayan and decided to write about my experience as I had decided before going inside the MRI tunnel. One more miraculous thing is while writing this, I got a notification to attend Shej Aarti for the 110th celebrations. Truly miraculous right?

Baba is with me. Let Baba shower His blessings on everyone, keep everyone happy and healthy. Om Sai Ram! I will very soon write about my experience again once my pain reduces. I know it will be reduced sooner by Baba’s blessings.

Sai Baba, Always There For His Devotees

Anonymous Shirdi Sai Devotee from India says: Om Sairam! I am a small devotee of Sai Baba. Baba has given me so much that I can neither count nor express in words. He was always there for me whenever I called Him.

I have so many small and big experiences to share; now I will share with you a very recent miracle of Sai Baba which I experienced. All around, so many people had suffered from this pandemic. My father’s corona result also came positive. When he got admitted to the hospital. I prayed to Baba, “My only biggest support is only You. You have to take care of my father.” And as always He listened to my prayers. After so much tension, fear struggles His blessings worked and he returned home safely.

I had promised Baba that I will share this experience once my father got discharged after recovering from this disease. But it’s human lazy nature that we don’t fulfill our commitments. After the discharge, the doctor said that you have to come to the hospital after one week for a normal check-up. But after one week when he went for his check-up the doctor said that for the blood-thinning they need to give injections and if we were comfortable then to get admitted for 2-3 days. When I got to know about this I got tense and then prayed and promised Baba to take care of my father and take him back safely to home. After 10 days he got discharged. He has recovered from Covid with Baba’s grace. He is weak but with Baba’s blessings, he will be fit and fine very soon. Jai Jai ho Sai Deva. Koti koti dhanyawad. Bow to Shri Sai, Peace be to all.

Anonymous Shirdi Sai Devotee from India says: Om Sairam. This platform fills us up with good vibes, faith, and optimism. Thank you for this platform. Om Sairam. I would like to share my experiences where Baba helped me.

1. My brother had to give an online entrance and in the beginning, there was some issue that got resolved as soon as I prayed to Baba and chanted His name. The rest of his test went smoothly by Baba’s grace. Thank You, Sai.

2. Recently when I went to my washroom, I saw a big lizard there and I got so scared but I chanted Baba, Baba and within minutes it went out of its own. Thank You, Sai. Baba, please protect my papa, Bhai, and me always. Guide us and keep us safe. You are our sole refuge, our protector. Om Sairam.

Anonymous Shirdi Sai Devotee from Malaysia says: Om Sairam. Thanks to the entire team for maintaining this wonderful platform.

Om Sairam. Regarding my experiences, Sai helped us to successfully complete the assessment and obtain the final approvals for releasing an award. This is one of the critical milestones for my project. Thanks, Baba. In the meetings, all went well and discussions were good with my super boss. This was all due to Baba’s blessings. My dad recovered from Covid and my family in India is all safe. This is due to Baba. Thanks, Baba. People have to follow Your path is my prayers to You Baba.

Anonymous Shirdi Sai Devotee from India says: Thanks to Hetalji and team for providing this platform for sharing experiences.

I am a Sai devotee and I have experienced many miracles. Today I want to share one of the miracles experienced by me. During my work time, I had faced many difficulties in ordering chemicals and performing experiments. Last day when I faced a problem, I prayed a lot to Sai. As I prayed Sai blessed me and I got good results. Thanks a lot, Sai. Please bless my family also.

Anonymous Shirdi Sai Devotee from India says: I am Maheswara from Hyderabad working in the IT field. Four days back I suffered from body pains. So I was a bit afraid due to Covid symptoms. I gave samples for the RTPCR test and the report got negative due to Baba’s grace. 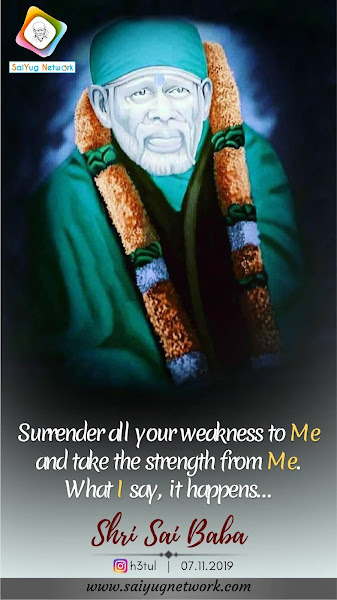