Skip to content
Sai Sister Paroma Ji from India says: OM SAI RAM Hetal Ji, thank you for giving us such a nice platform to share our experiences and thus increase our love, faith and devotion to Baba. You can mention my name and email id. I am from Kolkata. I have just joined my job, which is due to My Baba’s grace only. From childhood I have known Sai through my mother, who is an ardent devotee of Baba and I feel that she is very close to Baba. 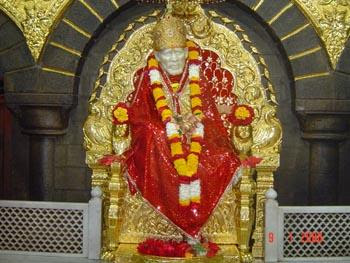 I went to Shirdi thrice, but then I only worshiped Baba like I did worship any other deity. I didn’t know anything about Him. My mother used to tell me about Him at times and gradually I became inclined towards Sai Baba. In 2008, I went to hostel and was pursuing engineering. By then I became devotee of Sai Baba and prayed to Him and Maa Durga. Still I didn’t know about His life. In 2012, I passed out engineering and was staying at home. Our college didn’t offer good campus placement. Though I was placed in a company based in Hyderabad, but I and my family both were quite unsure about the authenticity of the company.


I was supposed to join the company in August, 2012. I and my family went through a whole lot of turmoil thinking whether to join or not because joining the company was not a problem, but going all the way from Kolkata to Hyderabad, spending so much in settling me there, and after all these if the company turned out to be fake, then it would be a wastage of money and we were not in a position to waste so much of money at that time. I was vacillating between two ideas. But finally I don’t know how and who changed my mind and I didn’t go. But now I realize that it was my Sai’s wish that I didn’t go there as a company closed down in a few months and all my friends, who joined it faced a lot of trouble.

I studied very hard during period of August, 2013 to Dec, 2013. In September, I gave an Interview for a renowned petrochemical company. It went well. The HRs praised me, but the technical people said that it was not that good, but still I was expecting the job. I didn’t manage to secure name on the list when the results were declared after a week. In Jan 2013 I got selected in a good company though the salary was not good. After getting this job, I left my preparations for GATE and PSU’s because I wanted to do the job.

While waiting for this job, suddenly I got a call from that petrochemical company to join them. I was overwhelmed and extremely happy. I thought that 2013 gave a great start to me. I told all my friends and relatives. I was mentally preparing myself to join this company. I had interview for an IT MNC, which I decided not to attend because I wanted to join this company. I went for pre employment medical test. All went well. Doctors told me that I am medically fit and can surely join the job. But suddenly out of the blue after 2 days of attending the medical, I got call from that company again informing me that they are cancelling my recruitment without giving any reason and said that they will call me in case of future recruitment. I was shattered. All my dreams broke down in front of me. I didn’t know what my fault was. Later I came to know they employed someone who had source and rejected me.

Two days after getting this rejection call, I had the interview for IT MNC. Somehow I prepared. But was least interested and my mind was engrossed in deep sorrow. I cried to Sai Baba. I told Sai Baba that why are You not listening to me. But Baba was planning something better for me. I got selected. It was then I realized what Baba gave me. I never in my life imagined that I can work with such a huge company. It was like my dream come true because from childhood only I dreamt of getting into IT industry, but after doing engineering and after listening to others, I thought that maybe I should not go for IT. But Baba knew everything before hand and He knew my dreams fully and did fulfill all of them.

From here starts my journey with Baba. I got selected in three companies by Feb beginning, but was not getting joining from any. February passed and March came. People started joking from the IT giant I mentioned, but somehow my turn was not coming. I was depressed and tensed. I stared Reading SAI SATCHARITA. I did a week’s Parayan of the ebook. Then I went to Mandir on a Thursday and thought that if I can get the English version of the printed copy, then I can keep it with me always. I prayed to Baba .He listened to me. Though previously also I searched for the book, but I never got it. But this time Baba arranged it for me and I got the book from the stall in front of the Mandir. It was my Baba’s miracle only. Then after this I did 5 more Parayans. In this way March and April passed.

These two months changed my thoughts increased my patience and brought me closer to Baba .I always prayed to Baba to help me, but always gave Him a sort of deadline that within this time You will have to give me this. Again when it didn’t happen, I felt depressed. On April 26, which was my birthday, I prayed to Baba that before my birthday please give me the joining. I didn’t get it. I was upset. The next day, I went to Lokenath Baba’s birthplace. My mother always used to tell me that Lokenath Baba is Sai Baba of Bengal. I was praying to Baba there that please give me some sign, some hope and my Sai showed me rays of hope. After having our bhog there, we decided to return back. My mother told me to go to fill the water bottle. I went to fill it.

There were few people before me. Suddenly one uncle aged about 60 years started talking with me generally. He was very cordial, asked about my whereabouts, told about his and that he has come with his family pointed to his family sitting at a distance and told me about them. Then he asked about my education and job. I told about my education and then said that I was selected in 2 companies, but I haven’t got joining. The he said that which one you will join. I said that whichever gives me joining first, I will join that. But suddenly I don’t know why but he told me I will tell you which company to join. You will join the IT MNC. Then I smiled said ok and left.

While coming back, I felt very happy that this was the sign I was looking for. It was very surprising like it was an answer to all my
questions and all my doubts vanished. But I started thinking that I haven’t got joining from any company though I am selected. So there was really no option for me to select among the two. So maybe I will get the call from IT MNC first. After coming back home my mind changed. I surrendered to Baba fully thinking whatever He will do for me, would be the best. After 5 days, it was a Thursday and I was doing my puja and also talking to Sai Baba and was happy and relaxed as I thought that Sai will take care of everything. Suddenly I thought that I shall bring my cell, which was lying in the other room, brought it then continued with my puja.

Suddenly my phone rang and it was from the IT MNC. I got my joining on 10th may in Kolkata. I had lots of tensions regarding this as my family had planned a vacation and had given money to tour planner. Now if I had to relocate due to this joining thing, then I would need someone to go with me and also going to another city and settling there would cost initially a lot. I prayed to Baba always and said You know everything and will take care of everything. And He did. He solved all my problems. Again after getting call from the IT MNC, I got my joining letter and offer letter very easily, where people from other batches had to face lots of problem involving these. All was my Babas kripa. After 2 days of getting call from it again, I got call from the petrochemical company and they told me to join on 1st June 2013. People started asking me which one I would join. I thought and said that my Baba had given me the answer previously telling me to join the IT firm. So there’s no question of confusion.

Also I should mention this that when I was distressed so much, this blog came as a great help to me. It made me feel as Sai is answering my questions through the experiences of other devotees and thus it brought me more closer to Baba. Whenever I am in trouble, He comes and saves me. I want to tell everyone that what I felt in these months was that just surrender to Baba, remember Him always, talk about Him, and He will take care of everything. He is our father. He will help all. We just have to go to Him. He is with us always. May Sai bless all. May He bring all of us to His feet and thus save us from our miseries. Love You Baba. Sri Satchidananda Sadguru Sainath Maharaj Ki Jai. OM SAI RAM.