Skip to content
Sai Baba Guides To Ram Raksha Stotra. Do you think you are a sincere devotee of Sai Baba, check out at ShirdiSaiBabaDevotees.com 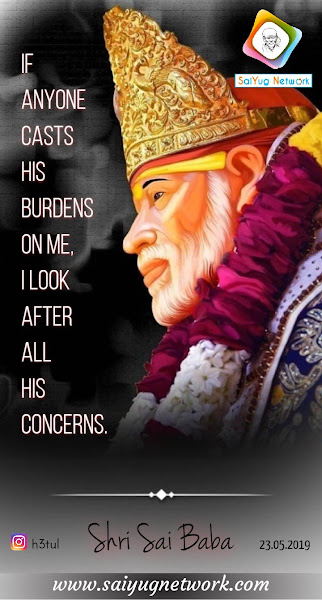 Anonymous Shirdi Sai Devotee from India says: Sairam to all my Sai devotees. Please do not disclose my name and my email address.

I am from Bangalore, I am going to narrate about my daughter’s IVF process. She has been trying to conceive for a year but she had cyst in her tube. She was operated successfully by Baba’s grace. After that the doctor told that one of her tubes was blocked completely so there were very less chances to get pregnant naturally. So they went for the IVF process. By Baba’s grace the doctor told to go for a donor and suggested that it was better to go if my daughter goes for sibling’s embryo.

My younger daughter (unmarried) agreed to donate her eggs happily by Baba’s grace. This happened only by Baba’s grace. It was a long process. She (younger daughter) had to take 10 days of injections continuously and lots of tablets. That too passed. With 17 eggs removed. Now it was my eldest daughter’s process that started. Out of 17 eggs only 9 were of good quality, and out of 9, 7 were very good. And out of 7 they kept 5 eggs for freezing. After three days of process as backup (if the first process fails they could use these eggs for the next cycle).

Two eggs they further processed for 5 days but it was a failure. Before transferring it to her again it was Baba’s wish. I felt very bad that nothing was happening. I cried a lot before my Deva to please give her only one child which would be His prasadam.

We had to wait for her next cycle. Again the same process which started from the second day of her periods to her 13th day, all injections and tablets. On the 10th day they did a scan and told everything was ok. They took three eggs and started the process of two days. On the second day they said those two eggs were also of no use.

Day and night I was praying to Baba to give some positive results. I promised Deva that I will stop taking non-veg and from the day of embryo transfer I will tell my daughter to start reading Sai Satcharitra and to finish It in one week. I started chatting Om Sai Rakshak Sharanam 108 times daily, and kept Udi for Baba’s lamp daily to make the egg fertility.

Next day they took 2 eggs and started the process. I was not able to sleep that day. I got up early in the morning at 4 AM and started chatting Om Sai Rakshak Sharanam. My daughter was also full of tension and was waiting for the call from the hospital. I had full faith in Him but still I was in fear at the same time. At about 9 AM I was unable to wait and my daughter called the hospital. They took five minutes and called back and told me that the eggs were ready. We were very happy, and thanked Deva 1000 times. Went to hospital and the transfer of embryo was done successfully by His grace. Now we are waiting for the result which will be in 15 days.

I request all Sai devotees to pray for good results. Each day is Baba’s grace for my daughter now. I have left everything to His pada. I have full confidence in Him. I am a member of Mahaparayan where I read two chapters every Thursday with full faith. I know this is a very long post. I had promised Baba that I shall post this leela once the transfer was done but I was little delayed.

I shall post the next leela of my Baba once it is confirmed. After her delivery I shall go to Shirdi with the little one and do 108 pradakshina near the sacred Neem tree (Gurusthaan). Once again I want to thank my Baba for all this process which was a success only because of His leela. Om Sai Ram.

Anonymous Shirdi Sai Devotee from India says: Jai Sairam. I am one of the children of our Sairam who is just trying to follow His words.

This is regarding my recent two experiences. The first one is that my cousin stopped talking to me suddenly for six months. I was lost. I had complete faith in Baba, still somewhere I was worried. So after two or three months I decided to take Naam smaran. But as much as I could try, I was not able to take it to my satisfaction. Then after two months some little more and my mind was controlled. I decided strongly to take His name. I took as much as possible. As I was taking I started feeling that Baba knows what is best for me, so let Him decide what to do. I just kept on taking His name. Then all of a sudden one Thursday night he called me and spoke. He said that he couldn’t speak as he was having some other problem due to his father’s health.

Second experience is also similar to this. One of my colleagues stopped talking to me and avoided me for reasons best known to him. I was so disturbed and worried. Then I went to Baba’s temple and prayed to solve this problem and decided to take His name. Also I asked in a question answer portal which said ‘With Baba’s blessings things would fall in place after Ram Navami’ and other times it came as ‘things would happen at the right time. Give up obstinacy.’ So I left everything to Baba and I felt let Him do what He wants to do for He knows the best for us. Just within five days he came and spoke to me as if nothing had happened. Hope both these problems will be solved forever.

Just I would like to tell you all that whatever the problem is, leave it to Baba and take His name alone. Rest He will take care. Om Sairam…!

Anonymous Shirdi Sai Devotee from India says: I am a small devotee of Baba from Karnataka. I want to share Sai Baba’s miracle relating to dad which happened in Jan 2021 – Feb 2021.

The story starts like this. My dad stays in a different place and I stay in a different place. Dad’s premium was due on January 17th or 18th not sure. Actually I had told dad to pay the premium before January 15 but he didn’t pay only. Baba’s leela started here. Actually Thursday I won’t go to dad’s place and that particular week I thought I will not go to dad’s place. As I got periods 12 days earlier so because of that I could pay the premium and could go to Shirdi. Tour people also had postponed the trip for three days because of that I could go.

Dad had told me to buy Baba idol from Shirdi which I bought for him. In Gurusthan I just took a random page from Sai Satcharitra and selected the number from the book. In that book they told that, “You have to do the work and you will get success.” So coming to the miracle I paid the premium by NEFT but the bank people didn’t know whose NEFT they had done. So meanwhile dad was admitted to hospital and he had to undergo angioplasty. So I went to the insurance company. They said it was lapsed. I was shattered. I was crying like anything. We had paid the amount. They are telling me it was lapsed. So I went to the main branch and they told me that the amount had come. They did the work and we got the document and we got a refund also. After coming home also he was feeling uneasy. So I thought I will do Brahma Muhurta Khichdi Parayana for three weeks. First Thursday Khichidi parayana miracle is that the doctor gave medicine for uneasiness, after that he was proper. Second Thursday insurance amount was claimed and we got 85% of the amount 3. Third Thursday the doctor told me the reports were fine and asked me to come after 6 months. Sairam!

Shirdi Sai Devotee Pooja from India says: I am Pooja Nanda. I am an ardent Sai devotee from Haryana.

My nephew has had skin allergies since childhood but from the past two years he is suffering badly. He gets upset because he does not find himself a normal child. Somehow I convinced him to read Sai Satcharitra and keep Nav Guruwar fast. With Sai Baba’s grace he is improving. Still sometimes he feels very low as his allergy gets worse. Sai Baba, please help him to have normal skin. Boost up his confidence. Keep us in Your lotus feet. Om Sairam!

Anonymous Shirdi Sai Devotee from India says: I had lost my gold ring and I prayed to Sai and Meher Baba to help me. As soon as I prayed I found it. Then I remembered that I was not finding my watch. I again took Baba’s name and Meher Baba’s name and promised to share here about Meher Baba and fulfil my promise of visiting Meher Baba’s Samadhi when I would visit Shirdi as it is on the way to Shirdi. I had promised to share here but somehow kept postponing. Sorry Baba for postponing and the delay as well. Jai Sairam!

Anonymous Shirdi Sai Devotee from India says: I want to be an Anonymous devotee of Baba. Thanking Baba for helping me by removing the dust particle in my eyes and also for reducing the stomach pain. Sorry for the delay in posting. I am grateful to You Baba. I love You.

Prayer Request – Peace At Work And Want Husband Back

Baba’s Leela Since I joined Mahaparayan