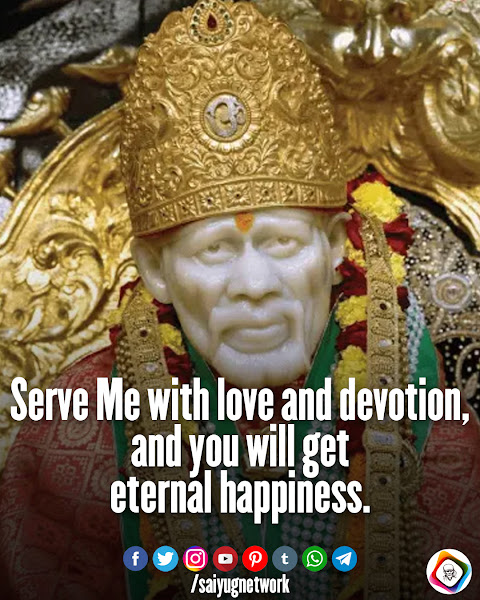 Anonymous Shirdi Sai Devotee from India says: My experience was in August 1968. One night I had a dream. In my dream I was visiting my High school. My high school was surrounded by gardens and playgrounds. I saw in every classroom my beloved teachers were delivering the lectures. Suddenly, I came across my favourite Kannada teacher Mr. Joshi and I saluted him. He asked me do you want to meet the Principal? I said that he might be busy. He said, “No, you can meet him, but his cabin is underground as before it was in front of the main gate.” I agreed and saluted my sir ‘Joshi’ and started to climb down underground.

I reached the principal’s cabin and saluted him. He asked me to take a seat. Suddenly I noticed the principal was wearing gumboots, I was surprised. There was no rain, nothing. After talking a while, he removed some Prasad from his gumboot and handed it to me and said, “Take this Gouri Prasad.” I bowed to him and respectfully took that prasad. He ordered me to eat it. It was so delicious even now. I felt that sir should have given it to me a little more. Sir read my mind and said in Kannada “That is ‘Gouri Prasad’, Prasad must be taken in small quantities only.” Unwillingly I agreed to that. Suddenly I woke up. After five to six months later my marriage took place without any time for preparation. I came to know the meaning of Gouri Prasad. During my fourth visit to Shirdi I ate Sai Satyavrat Prasad, which tasted the same as Gouri Prasad.

I came to Mumbai with my husband. Before coming to Mumbai I requested my husband to purchase for me ‘Sai Satcharitra’ in Kannada and a small Sai photo in which Baba used to sit on the stone which is in Dwarakamai with Om symbol.

Before leaving for Mumbai I got a dream in which God Baba was wearing white Kaftan, white head gear, white lungi, standing on a raised platform which looked like a temple, giving a smile just like Lord Krishna. He was so attractive that I cannot forget that smile. I said loudly to myself, “Look there is Sai Baba standing on the raised platform”; just as we used to say “Look there is my father” I was standing on the ground. Suddenly Baba said to me, “I am going now, I will meet you later.” I enquired Him, “WHERE?” He answered “At My Sister’s Place” and He vanished. I felt very bad since I had not saluted Baba and He said that he was going to meet me later. But I came to know the meaning of these words after twenty-two years. I will write it in my next experience the meaning of Baba’s words, “I Will Meet You Later.” Baba is omniscient. He knows our past, present and future. Om Sairam.

1. The first and foremost miracle is that Baba protected my parents during the pandemic. They are old and hypertensive, both are doctors and hence at high risk. My father also has heart disease. Besides, I stayed away from them for my post graduation and was always worried about their safety. My mother even got infected but thankfully she recovered and my father didn’t contract the infection even with close contact. This was nothing short of a miracle for me. I pray that He continues protecting my parents in the wake of the second wave too.

2. I was travelling home after months just when the first Covid peak had subsided and I have had many swab tests for the same being a medico. But while returning from my home at the airport, there was a huge crowd for the testing and I didn’t want to stand in the queue as I was already exhausted by waking up at 4:30 and changing flights. I prayed to Sai and He answered. The testing team said that I could get tested later at my own hospital.

3. I was setting up my table fan after having kept it in storage for winter and one of the parts got stuck. I was trying hard to get it unstuck but all in vain until I prayed to our beloved Baba and He answered. Shri Anantkoti Brahmandnayak Shri satchinanda sadguru Sainath Maharaj ki Jai!

Anonymous Shirdi Sai Devotee from US says: I reside in the USA and have been experiencing Baba’s leelas for the past two years.

I have been struggling with some work in the office for the past few months. I prayed Sai wholeheartedly for help to solve that as it was a critical task to complete. At one stage I felt like it was an impossible task to perform but Sai made my hopes alive by giving me positive answers through chits and questions and answers websites.

Sometimes I used to get answers by chanting His name “Sairam”. Baba guided me to listen to Ramayanam when I asked in the question and answers website. As I was busy with work I kept on postponing it. But Baba’s plans are different. Daily when I drove to the office I put on some songs to listen to. Suddenly one day Ramayanam episodes started as our USB drive has all Ramayanam audios. I felt like Baba was insisting me to listen to it. So I started listening to it daily while driving to the office. Finally it was a miracle as in one day the problem was solved and it worked beautifully. Our merciful Baba guided me at each and every step of my work.

Thank You Sai for getting me a promotion. In previous jobs I got promotions and salary raises whenever I listened to Ramayanam. Baba knows everything. He made me listen to it and granted me a promotion.

After having Covid vaccine I was having fever and muscle pains for two days. Thank You Sai for curing my pains and protecting my family from Covid. Om Sachidananda Sadguru Sainath Maharajki Jai.

Anonymous Shirdi Sai Devotee from US says: Sairam Everyone. I have been Baba’s devotee since childhood. I live in the US with my family. I have two beautiful kids. My husband and I are on bad terms. I am living with him just for my kids and trusting that Baba will show us the path. Baba helped me in toughest of tough situations. He gave me a job when I needed it the most to take care of my kids and gave me strength to face everything with courage and Baba never left my side.

Recently Baba also gave me an opportunity to work in the desired department which would help me in advancement.

Last week I had a very important meeting I had to facilitate. I prayed to Baba to give me confidence to handle all. Baba helped me with the same and the meeting went smoothly and my manager was happy too.

Now Baba You know how much I want to buy a house for kids. Please help me and guide me in this process.Thank You so much Baba. Please Baba be with us all the time. Please Baba remove bad stuff from the world and save us. Sarva Loka Samantha Sukhino Bhavanthu

Anonymous Shirdi Sai Devotee from India says: thanks Hetalji for running this wonderful site and it’s a hope to me. Whenever I am upset I come here and read the experiences.

I don’t know how to start but Baba knows what I am going through. I came here only by Baba’s blessings. Its Baba Who chose this path for me. I am just here by Baba’s grace and hope. But I am very down and hopeless nowadays.

It’s not that I didn’t experience Baba’s leelas. I experienced them many times. I am not even angry at Baba. I am not at all angry at Him. May be He is testing me but I am scared what if I can’t come and share another experience. I just need all your prayers so that I come out of this tough phase successfully and Baba helps me as He used to do all time.

I have no one right now except Baba. Please pray for me Hetalji and if my experience doesn’t seem to be worth sharing then its your wish but I just want to pen down. Om Sairam.

Anonymous Shirdi Sai Devotee from India says: Om Sairam! I saw that one of my ear pods was missing. I searched but did not find it. They were new and just before my son was playing in the room. I feared if he was playing it and misplaced it. Then losing all hopes I prayed Baba for help and promised to post here if found. As soon as I prayed I found it. Thank You Baba. Posting here as promised. Jai Sairam!

Baba Got US Visa Extension Approved