Anonymous Shirdi Sai Devotee from India says: Om Sairam! Few days back I shared an experience about my mom not well. She felt that she must have had Corona and when asked through chits Baba had said yes for Corona. By the time she doubted that she must have had corona, she was alright and even if we would check it, it would come negative. Then I suggested my mom do an antibody test and she denied saying that she wanted to check Baba’s answer. Then I too felt ashamed and kept quiet.

Later after almost a month when my dad took the vaccine he insisted my mom also take the vaccine. I asked them to hold on as I had heard that if one gets Covid positive then he or she must get a vaccine only after three months. So I asked my mom to do an antibody test. She agreed and with Baba’s grace we were able to book it at a good price. When the results came it showed positive for antibodies and value was 27 point something. All were shocked as Baba had long ago told this through chits. The main thing was He took care of my parents so well. He did not get it transmitted to the maids, or my parents, my kids and my in-laws (as we had happened to meet her in that period). My dad is a senior citizen with BP and sugar. Baba took all the care.

When my mom told our maids about this event they were shocked and said that Baba knew that no one was there to take care of them and hence Baba let it know only after everything was fine. (If mom would have known it before then maids would also be stopped and then it would have been extremely difficult to manage everything especially the domestic work).

Baba thank You so much for taking care of my mother in so many special ways through my cousin bhabhi in that period (unknowingly) as shared in my previous experience. You came in the form of her and saved my mother.

Dear devotees please go through my previous post regarding this Baba’s Naamjaap Is The Shield For His Devotees. It will show how Naam jaap saved my mother from this corona in this age too with minimum trouble.

Thank You Baba once again for saving my parents. Sorry for having the light curiosity to check the scientific report too although I knew that Your chits are never wrong. Sorry if I have hurt You in any way, but I believe You only are the Doer and Inspirer behind all these leelas of Yours.

Baba Made Relations Back To Normal 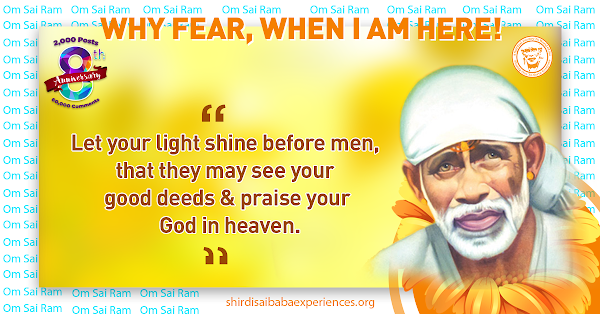 Anonymous Shirdi Sai Devotee from India says: Sai…Sai, to all the beautiful children of our beloved Baba. True to Poojaji’s statement Baba becomes a doctor, chef, architect, travel advisor at His own time when required. I will explain the same in the coming lines.

There is one wallpaper that surfaces sometimes on our Saiyug site and it states that “Marriage was designed in the mind of God and not any government institution developed it.” I may not be getting the exact words but the essence is the same.

The experience goes like that, me and my wife had a fight over some joke that I cracked on her. She took it very harshly and I thought that she would be back to normal in some time. After dinner I asked her to come and sleep but she said that she would sleep with children that night. I understood that she was angry and took my son along.

Next day I asked her to join in the pooja but she refused. I took the same too lightly. From then onwards she stopped talking and I too stopped talking to her. The silent fight went on till 12-15 days and she spoke to me rudely asking for a separation too. I started shouting on her for this idiocy. I explained to her that we have small kids and there was no ground that we get separated on such silly grounds. She slept and I too went in my room.

Now I implored Deva to intercede and clear this misunderstanding so that our life should get back to normalcy. As usual a heartfelt prayer can never go unanswered by our merciful Father and Mother. From the next day evening she was getting back to normal and we cleared things in the night. We both exchanged SORRY’S and the battle was again won by none other than Baba. He played the peacemaker’s part and showered His grace on us.

One small prayer to You Baba that my wife is good but the only problem is that she cannot understand the roots of our family. I just want her to understand that good and positive thoughts can change our lives for our better. Sai…Sai…Loka Samasta Sukhi Bhavantu. 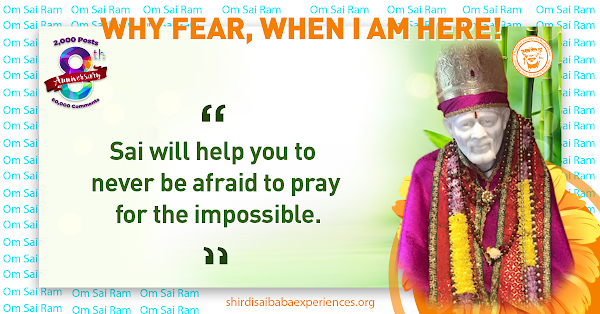 Anonymous Shirdi Sai Devotee from India says: At first thank you and gratitude to all of you and Baba. I want to tell the journey with Baba. I wanted a Guru Who guides me properly in my life. Then I did not know about Baba. One morning I saw a dream where I was worshiping some deity and cleaning His photo. I could not understand whose photo it was. At that time I was preparing myself for a job. But I could not get success.

One day my neighbour aunty told me about Baba and Thursday Puja. I started doing it wholeheartedly. There was a thing that I only knew about Satya Sai Baba and His photo already was in my room. After fulfilling (my loved one got a job) of my one wish I could know about Shirdi Sai Baba. Then I started to worship both of them. My journey with Baba is 11 months. I experienced many things as His blessings.

After some months, I got a job by Baba’s grace. It was the greatest journey with Baba from the beginning. One lady turned up with Baba’s photo on the road when I was going to give an interview. Baba gave many indications about it. I have totally surrendered into His feet. I have cherished every moment with Baba.

Baba came in my dream as Shiva and told me to worship Him. 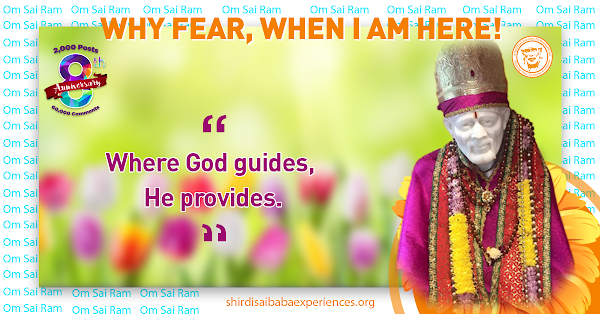 Anonymous Shirdi Sai Devotee from India says: I am an ardent devotee of Baba and believe that Baba is guiding me in every step of my life.

Coming to my experience as promised to Baba. I had visited a shop and purchased certain material. After purchase I made a payment through my app. The payment failed. Again I retried and the result was the same. I told the shopkeeper that I would go home and make the payment through Phone Pe. In the meantime I went to another shop to purchase a few materials. I made payment and it was successful. After making payment I realized that the balance in my bank was showing less amount. When I went to check the deductions it showed twice payment done to the same merchant. I was shocked and called the bank to check why the amount was deducted. They said to wait for two days. Either it would get credited to the merchant or it would be returned to my account.

My dear devotees have faith in Baba when anyone is in trouble. He will surely help us. Sorry Baba posting late but as promised I am doing it. Bow to Sri Sai peace be to all.

Anonymous Shirdi Sai Devotee from India says: I am Sreedevi from India. I firmly believe that Sai is like my father, mother and whole family. Om Sairam to all Sai devotees.

A while back I went to a regular health check-up and ended up knowing that there was a slight possibility that I might get diagnosed with diabetes, it was terrifying to know that and it shook me to the core.

Doctors said that I have to take a test after three months related to sugar and blood tests. Then I decided to vow to Baba that if He could bless me and help me in that situation. I also vowed that I would share this graceful experience with fellow devotees. As always Sai Baba was there for me and the results came negative.

I can never expect to pay Him back all the things that He has done for me in this lifetime alone.
Love You Sai Maa. Thank You for arranging such platforms. Thank you so much Hetalji.

Sai Baba Blessed With A Job

Anonymous Shirdi Sai Devotee from USA says: Sai Baba helped in every difficult situation. Sometimes I fail to realize that.

Firstly I want to thank Hetalji who gave devotees such a nice platform to post our experiences. It’s such a nice feeling when we see devotees posting their experiences. By this when our faith is shaken it would gain its strength again to leave on Baba and have a positivity around us.

I am a strong devotee of Sai Baba from past five years and have been praying Baba to find me a job. By the grace of Baba I finally found a job that I had been waiting for. Thank You so much Baba for showing Your love on me and my family. I pray to You Baba that I do my job well with Your blessings.

May Baba’s blessings are with you all.
Om Sairam!