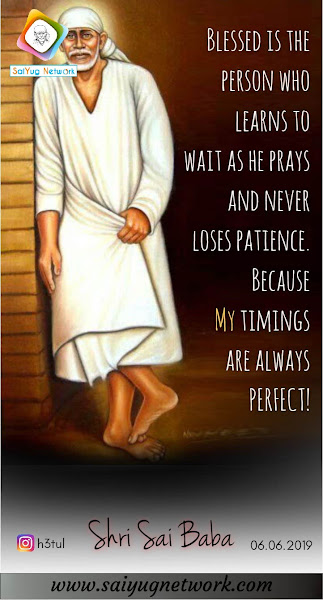 Shirdi Sai Devotee Shradha from Singapore says: I am Shradha, residing in Singapore. Thank you so much Hetalji for giving all Sai devotees this platform to share his/her experiences. I am a devotee of Sai Baba. I always feel that He is with me in every phase of my life. Through this platform I want to share one of my Sai experiences, where actually I felt Sai’s presence. I feel many experiences which I will share later, but this one is unique.

I live in Singapore. In January 2019, I visited Shirdi with my mother and 5 years old son. I should not say visited, but actually Baba attracted His bhakts from far distance also. In my mind I talked to Baba and asked Him, “As I am here in Your city, can You show some miracle to me?

When I reached the airport, we hired a taxi. Earlier the taxi driver was asking more money to us but we walked away and after some time he came to us and said, “I will take you only. Don’t worry, give whatever you want.”

Driver was a jolly person and he was telling us about the city. My mother said that he is good and asked him if he could go to Shani Shingnapur(Shani temple) also with us. I asked him and he said, “Why not? I will go with you and you will not feel any problem.” I asked his number and saved it with his name Siddhartha. I called him also, so that he can save my number and he saved also.

Later he told us, “First you people eat something and then do darshan. It is good to eat first as you have a kid with you, he might be hungry.” We obeyed his words and reached the hotel and ate food.
He waited for us and dropped at the temple and told me that his brother would pick us up later and he would call me. After Baba’s darshan, we were very happy and came outside, ate some food and called Sidhartha. But nobody answered the phone. His so called brother called us and we decided to go to Shani Shingnapur in the morning.

Next day, we got ready and checked out from the hotel and called Siddhartha. He said that he was waiting downstairs. When we reached there, no Siddhartha was there. I asked the taxi driver if he was his brother. He said, “Who Siddhartha? No one called me to pick you. Only you called me to pick you. I showed the phone number. He said that it was his owner’s number who was standing there. He said, “I was coordinating with you. How come you saved my number with Siddhartha. I was shocked, his phone no digits were almost different than what I had saved. Everyone was shocked. But the taxi driver said, “I never heard anything like this. Please come in my taxi to Shani temple darshan and I will drop you to the airport.” The miracle, which I was awaiting, was this only. How I saved another number. I called nobody except him in Shirdi. Even Sidhartha did not take money when he dropped us off at the hotel. He said that he would collect later.

Sai was there I knew for me and for my family. You are my Guru and all my life I will follow Your teachings. Om Sai Namo Namah.

Anonymous Shirdi Sai Devotee from India says: I am a devotee of Baba from past 24 years and I have had many experiences of Baba over these years. I am an ENT surgeon by profession and I had seen many patients with throat pain and cough in the month of March before the lock down due to which fear had overtaken me thinking that I might get corona infection(as corona was new then). This fear had pushed me into depression.

Then during that time (the month of April ) I had a dream in which I was in a backyard. It was dark all around and I heard a voice saying, “Why do you believe in astrology/horoscope and stuff like that? Let go off all that and surrender to me.” Then I asked, “How do I believe it is You speaking Baba?” As soon as I asked that question immediately Baba’s picture appeared on the wall next to a door leading to the backyard and again I heard the voice saying read page no 153 from my Satcharitra you will know.” There ended the dream.

As soon as I got up I remembered the dream very vividly. Immediately went and checked the 153 page it had the story of Madrasi bhajani mandali but the page belonged to the chapter in which Baba asked Tendulkar to throw away the horoscope, seeing that I was overwhelmed with emotions and I mentally thanked Baba for the experience and for always being there for me.

I don’t know why that dream? I thought I had the habit of consulting astrologers but then I had no intention or planning to consult an astrologer. For whatever reason I got the dream it got me out of the depression and anxiety that I was going through.

I know very well that being a devotee of Baba doesn’t guarantee us protection from problems/sufferings in life but one thing is for sure that He will always be there behind us giving us the strength to face the difficulties. Om Sairam.

Baba’s Blessings With Me

Anonymous Shirdi Sai Devotee from India says: Om Sairam to all Sai Family. Shree Sachindananda Sadguru Sainath Maharaj Ki Jai! It is true that according to our karma we suffer. It happens with everyone. As nothing is constant in this dynamic world and everything is changeable. So our sadness will also vanish, and since Sai Baba is there we will not be harmed of anything. Having this thought in my mind I always face each and every situation and also feel Baba’s blessings. Today the identity I get only because of Him.

Here is my experience: I and my mother are doing 9 Thursdays vrat. Yesterday it happened after noon Arati that we went outside to give Baba’s prasadam to dog, cow and crow. Unfortunately no one was there. We felt so sad and I prayed to Baba, “Please before taking prasadam, a dog or cow should come.”

Then we kept prasadam aside and waited for a dog or cow. My mother was repeatedly checking for a dog outside. Before a few minutes of having prasadam out of nowhere one dog came. By seeing the dog we felt so happy and blessed. This was like a miracle for me.

Coming to another experience, my laptop has some issues. It became very slow and the screen was black. It scared me because it was not mine. Then I prayed to Baba and applied Udi. To my surprise it started working.

Thank You Baba for everything. As I promised I am writing my experiences. Baba, please forgive me for the delay in posting and the mistakes I did knowingly or unknowingly. Please save this world from Corona Pandemic Deva. Om Sai Rakshak Sharanam.

Anonymous Shirdi Sai Devotee from India says: I’m Baba’s devotee. Baba is my saviour. I am sharing a recent experience. So my daughter had an eye check-up and the eye doctor said that she needed glasses. I was shocked as no one in my family got glasses at such a young age. Doctor asked us to come after 2 weeks and that he would test again and prescribe glasses. I kept crying for 2 days and sat in front of Baba to help me.

I started Sai Divya Pooja, started reading Sai Stavana Manjari and also promised Baba to share my experience if the other appointment went fine. Then throughout the appointment I was praying to Baba. Surprisingly this test my daughter did well, the doctor said that there was no need for glasses. I was so happy and without Baba’s help this never would have happened. Thank You so, so much Baba. Please bless me and my family. Forgive me for all my mistakes. Om Sairam

This experience is about my daughter Naomika Sai. Recently we pierced her ears and everything was fine. But one day she accidentally fell down while playing and got hurt on the rear part of her ear which we couldn’t notice. I noticed it after a day while giving her a bath. There was blood clot and my ear got swollen on the rear side, it is not visible from the front side. Slowly pus accumulated. I prayed to Baba and applied turmeric, Udi mixed in warm oil. Then after two days I prayed to Baba to cure it and applied only Udi on that wound. It’s miraculous that by the next day 90% of the wound had got cured. There was neither blood nor pus visible. Swelling had vanished completely. Thank You so much Baba. We are ever indebted to You. Love You so much!

Anonymous Shirdi Sai Devotee from India says: I had my left eye’s upper lid quite swollen. It was a lot. My mother-in-law asked me to put rose water or treat it with warm water. I just applied Udi and prayed Baba to heal it and that I would post here. With Baba’s grace it was cured without any medicine or going to the doctor in this pandemic. It was the magic of Baba’s Udi. Thank You Baba and thus posting here as per my promise to You. Thank You so much Baba. Jai Sairam!