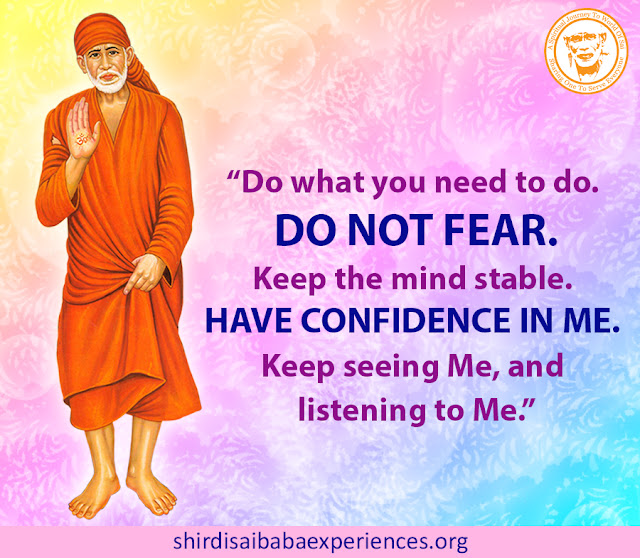 Shirdi Sai Devotee Kavitha From US Says: I am Sai devotee, Kavitha from US. This is my second time posting experience here. Link to my first post: Udi Miracles And Healing Powers. I am one of the millions and millions of Sai devotees. First of all, many, many thanks to Hetalji and all the people who maintain this great website as it is a pleasure to be part of this community and to read Baba’s experiences every day.

Ever since I became a Baba devotee (beginning of 2018), I had dreams of visiting Shirdi. Though I went to India in the summer of 2018, I could not make it to Shirdi and was a bit disappointed and kept praying to Baba to please make my Shirdi dream come true.

Around 2 months before our India trip in 2019, I kept getting messages from various sources (instagram/internet) that “You will visit Shirdi very soon”. I got the message from Baba so many times that I was very positive that this time I would be able to make it to Shirdi. Surprisingly, all the dates worked out fine and my husband happily agreed to the idea of going to Shirdi (unlike last year). He himself told that we would go on a Thursday. By Baba’s grace, we reached there on a Thursday and had wonderful darshan.

I experienced some feeling that I cannot explain in words; all tears of joy (especially in Dwarakamai) and could strongly feel Baba’s presence. It is something I will cherish forever. Just before we were getting out of the temple, I asked the security person if I could get more Udi. He asked us to check in the donation centre. We gave some money to the person in the counter and he randomly gave us many, many packets of Udi to us which was totally unexpected. They were all totally Baba’s leelas! I couldn’t stop my tears.

I always wish for more and more Udi. I have been giving it to my daughter daily (who has some health issues). After getting loads of Udi and Baba’s blessings, I was very happy.

Our return journey was planned for the next day (Friday) and I woke up at 3.30 am without any alarm and could go again during Kakad aarti time. I felt that Baba woke me up at that time.

I wanted to buy a white marble idol of Baba in the shopping centre there, but could not find enough time. I was a bit upset and while we were just about to checkout from the hotel, the hotel staff called us and told that there was a gift for us – when I opened, oh my God, it was white marble statue of Baba.

Before we left Shirdi, my daughter got a severe headache and we were wondering if we would be able to return that day as planned earlier. I gave her Udi mixed with water and within a few minutes, she became alright. Again many, many thanks to Baba. Overall, I feel so blessed that I could visit Shirdi as I dreamt and could experience His multiple leelas. Anantkoti Brahmand Nayak Rajadhiraj Yogiraj Parbrahma Shri Sachidanand Satguru Sainath Maharaj ki Jai!

Baba Helped All The Way To Get Job In MNC

Anonymous Shirdi Sai Devotee From India Says: I’m a housewife and a mother of two daughters. I am a very, very small devotee of Sai Babaji.

My daughter got a chance to get job in MNC’s in New Delhi. But the problem was that she didn’t have result of B.A final year. She cleared all the interview round by the blessings of Sai Baba and the interview round took nearly two months. It was very frustrating but Baba always helped. Now when we submitted the documents, problem started with the results. My daughter talked to ignou University. They said that they couldn’t do anything. Then I thought that I need to go to ignou personally and try to request them. I took chit yes or no in front of Babaji’s charan and prayed Baba if He would say to go to University and would help then I would go to ignou otherwise I would not go there and that I would accept that this job wasn’t for my daughter. I would also accept it as His wish happily because He knows what is good and bad for us. I picked up chit and it was Yes. Then I got ready to go to the university.

You won’t believe there came so many problems to make them understand but every time Baba helped and miracle was I saw Baba’s photo everywhere like Baba was saying, “Don’t worry, I’m there. You only try and I will do the rest.” Ultimately before closing the office they mailed ignou documents to the company for getting a job and they attested the documents and stamped on the documents. I sent all the copies through whats app to submit in the company. They approved that document and gave her the job. Thanks to Sai Babaji. He always helps all His children. Thank You so much Sai Babaji.

Baba Was With Me In The Hospital

Anonymous Shirdi Sai Devotee From India Says: I am a small devotee of Baba. I can never thank Him for His blessings upon me. Coming to my experience.

I have been suffering from infertility for the last 7 years. Due to wrong diagnosis of some doctors I had to undergo wrong hormonal treatments which resulted in PCOS. This occurs due to hormonal imbalance.

Without taking any allopathic medicine and taking Baba’s Udi along with water I didn’t take any treatments for 1 and half year. But a month back I had acute pain in my breasts which didn’t subside even after taking Baba’s Udi. I was helpless and scared as my maternal grandmother died due to breast cancer. I had recently shifted to a new place and didn’t know what to do.

I was upset with Baba and asked to guide me somehow. I suddenly had this confidence that maybe Baba wanted me to go to a doctor. I immediately took an appointment (my husband didn’t accompany me) and showed it. She said that it was nothing but fibroadenosis but asked me to do a mammography due to family history. She said it was mainly due to hormonal imbalance. I immediately got scared that maybe my PCOS was in full force. She also asked me to do an ultrasound.

On the appointed day I asked Baba to please show the power of His Udi as It was His test that day and said that I was completely alone without Him. My husband could not accompany me. More than mammography I was worried about my ultrasound but the doctor said everything was normal. I was continuously chanting “Sai, Sai…” I was wonder struck that when I came to the reception to pay I saw Baba’s photo on the table calendar. I was standing there before for almost half an hour but I never noticed it. I then remembered that my Baba was there with me in the hospital. Sorry for the long post. Thank You. Om Sairam.

Sai Baba Is My Doctor And Udi Is My Medicine

Shirdi Sai Devotee Mini Das From India Says: I am Mini Das from Guwahati Assam, India. I have my business. I am 45 years woman. I studied in Guwahati commerce college.
Om Sairam. I am an ardent devotee of Sai Baba. I have lots of experiences with Sai Baba. But today I am posting a few experiences. This is my first post that I am posting.

Baba had given me a new house and shop in October 2018. Thank You Baba.

Baba is my doctor. This year January me and my mom were suffering in continuously for a week. Baba cured both of us without visiting a doctor. Udi is our medicine.

Sai Baba cured my skin allergy problems without taking medicine. I was only praying Sai Baba to get rid of allergy problems. Sai Baba listened to my prayer and Baba cured me with His blessings. Sai Baba had solved my menstrual problem. Thank You Baba. Baba said in Sai Satcharitra chapter 15 ‘if you spread your palm with devotion before me, I am immediately with you day and night. I really feel that Sai Baba is with us.

Baba had kept me away from bad company and shown me the right path. Sai Baba is my Father, Mother and Guru. Om Sai Nathay Namah.

Anonymous Shirdi Sai Devotee From India Says: I have been a devotee of Shirdi Sainath for four decades. Everyday He has been with us in all our ordeals guiding us. I would like to share an experience of a health issue. I had a problem in my breast. I was so worried that I prayed very hard and held on to the holy feet. I do not have enough words to describe the miracles of Baba. I went for investigations and I was diagnosed as DCIS. It is one of the pre malignant conditions where one is totally cured. I cannot imagine my fate. Had it not been His guidance my constant prayer and faith in Him cured me totally. May Sai’s grace be on all those who come into His fold. Om Sri Sairam.

Anonymous Shirdi Sai Devotee From Indonesia Says: Dear Baba, I am forever grateful to You for helping me yesterday. I was very tensed and You helped me with all the worries I had. You saved me from the thought I had in mind that was killing me. You helped me to come back home early before others left and no one noticed. You also helped me with my OCD problem. Thank You very much Baba. Baba please help me next week also. Om Shirdhi Vasaya Vidhamahi, Sachdananda Dhimahi, Tano Sai Prachodayat.