Skip to content
Anonymous Devotee from Canada says: Hello, Firstly, I would like to thank you for considering my experience to be shared. Please forgive any unforeseeable mistakes, as this is my first time doing so. I currently reside in Canada, and have been in touch with Baba for about four years now. Day by day, and experience by experience, my faith strengthens. I feel very blessed to feel the presence of Baba in my tough times, as a guiding light Who is and always will be watching over me. As promised, I would like to share couple of my experiences, rather miracles, having observed the Sai Nav Guruvar Vrat. I am in my early twenties, and lately have faced many tough times in terms of my studies, finances, personal life etc. It seemed as if everything seemed to have crashed down at once, and I hit rock bottom. I am very worried about my future, career wise and otherwise. Having had faith, and realizing that no matter how low things get, I still should be happy for what I have, I tried to keep moving forward. 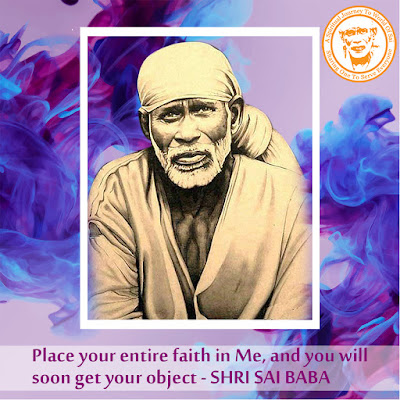 I was inspired to observe the Sai Nav Guruvar Vrat by reading other experiences and Sai Baba stories, by reading many other experiences of devotees, especially those observing the Sai Nav Vrat. There are many miracles of myself to describe. I have no idea where to start from and where to end, if I can. At this point I am just putting my trust on Baba, and writing as it comes to my mind. I feel very small and with great humility even ashamed at times that what good have I done to receive Baba’s guidance and blessings? With so many mistakes that I have made, even broken promises to Baba, I still feel His blessings. I just want to take this chance and say Thank You Baba for everything. I know the whole world can turn away from me, but You will always be there. Thank You for everything, words are too short to describe. It makes me want to be a better person, and I need Your guidance to become closer to You.

As for my experience(s), Having gone through already a rough time i.e. downfall in studies, losing career path, accumulating student debts, and on top of that financial scam that I got, I was facing turmoil in my life. It felt as if nothing was going right. I am highly career minded, and studies are very important for me and my family. But somehow, with faults of my own, I just could not manage the pressure, and burden of expectations. I started losing myself, and ultimately everything around me fell apart. It was a combination of many things going on at once that gave me every reason to lose hope in life. However, what really prompted me to observe the Sai Nav Guruvar Vrat was my attachment to someone I could not understand. I felt greatly hurt by someone who had no intention of hurting me. But somehow his actions and things around me related to him seemed to really get to me personally. I felt as if I was being lied to and reality was bigger than I could imagine. I tried my best to stay away, and mind my own business like I always do, however, my thoughts seemed to have centred around that one person with so many doubts and questions in my mind. I felt like hating him, but could not. I really didn’t know what went inside my mind, and why I seemed to have taken everything so seriously. Highly disturbed by some of his actions, and what I think were lies, I observed the Sai Vrat. In spite of everything else that was going on, my main intention seemed to have been this. I wanted to know his reality. I wanted answers to many of my doubts.

Without getting in to so much detail, I would just like to say miracles and wonders that have happened since I observed this Vrat. It was my first time. And I tried to do as I can. It took me more than double the time to complete the Vrat as I skipped many Thursdays in between. I started sometime back in February 2014, however i made many mistakes in between. I had specially stopped doing it since the financial scammed that I suffered through. However, I started again in May and recently completed it. In spite of my many mistakes, Baba did not punish me or leave my hand. My will to complete it got stronger and by His grace I finished it. All I can say is that if your intentions are pure, and conscience internally is clear, (though I don’t think mine was or ever will be as clean as it should be), Baba will help you. I used to read His 11 assurances and gain peace of mind. At times I felt like I only remember Him in my bad times, because that’s when I start reading experiences, Sai Satcharitra etc. However, I am and always will be forever grateful to Baba for coming into my life and making me His daughter.

As for the concluding experience, it was surrounded by some very wrong impressions of that person that I wanted answers to. I wanted to know his reality. And it unfolded in front of me like I never imagined possible. I had it in my mind that if I get to know the truth about this person it should be in a Thursday and that is exactly what happened this September. Many of my misunderstandings were cleared automatically due to Baba’s miracle. I became closer to that person than I was ever before. I wanted him to tell me the truth about his life on his own without being asked, and that happened on its own, on a Thursday! This was beyond my imagination, and nothing less than a miracle. I told Baba many times in my heart that if he is wrong type of person, then it should unfold in front of me. Or if there is a different reality that surrounds him, please let it unfold without me having to ask. I felt too attached, though I tried my best to keep away because his reputation regarding character was not that good. Who am I to say, but it really used to hurt me personally for some reason when I heard wrong things about him. But I was wrong in many ways, and Baba helped me see this. Things did unfold in front of me, and my wrong impression was cleared, at least most of it.

Next, on the concluding day of the Vrat, I went to Mandir to perform all due formalities, and while prostrating in front of Baba, I saw a Ladoo on my side which brought a thought in my mind that what if Pandit ji asks me to have this. I never thought it would happen, because Prasad table was on the opposite end and Prasad was not running out there. These ladoos were placed specially around Baba. As Pandit ji handed me over sweets from the table, I started eating them and thought “before I finish this one, would he ask me for another one?” To my surprise, just before my last bite of the sweets, Pandit ji himself told my mom “Yeh Ladoos Specially India Se Aaye Hai, Take More (These Ladoos have come specially from India)” He handed them to my mom, to which she said, to give to me with his own hands. I was stunned!! Maybe you have to be there and experience your thoughts being read to really realize how overwhelming this situation can be. Words are not sufficient to describe every feeling at times. I was more than happy to know that Baba read my thoughts. The ladoos were on a different pile than I imagine, but they were around Baba’s Idol and specially came from India.

Next, Last Thursday on Diwali, I had a dream of Baba’s Idol wrapped in a red cloth. I try and visit temple on Thursdays and at times I bring a little scarf to put around His Idol. I thought to myself of bringing something red as per my dream. However, I could only get orange, which I thought was close enough. When I went to the temple, and saw Baba, He was already wearing Red. I was more than happy. My orange scarf complimented His outfit perfectly. I was really pleased to get such hints and indications from Baba, which tell me that He is there no matter what. Last Thursday, on Diwali there was to be a solar eclipse, during which we are not allowed to touch the Idols. Baba gave me just enough time to finish my Darshan before Pandit ji announced the start of the eclipse. Once again I was thrilled because I was running late, but made it just in time of announcement. Baba I love You tremendously, and it’s enough to know You will always be there to hold my hand through good times and bad, happy or sad. I could really relate to the story that Baba holding your hand is better than you holding His, because during trial times you can leave His hand, but He will Never leave yours. In spite of my many mistakes, sins and troubles, when I have no reason to live, thank You for giving me hope. Please always be there, for everyone, and help us all on the right path. Om Sai Ram.