Baba Knows What You Want

Anonymous Devotee from Australia says: First of all Sai Ram to all Baba Devotees and thank you Hetal ji for sharing such a wonderful blog where our faith in Baba is boosted 10 times after reading Baba’s Leela on regular basis. I am Baba’s devotee since 2005 and He has looked after me like my own Mother, and i know He will never leave me no matter what. I really don’t know when He gave me the Shraddha and Saburi and how i got stuck to His Lotus Feet, now i cannot imagine a day without Him. I have lot of experiences of Baba on regular day to day basis where i feel His presence around me. But the experiences, which I am going to share, are miracles which Baba and only Baba can do.

I used to read Shri Sai Satcharitra and used to feel happy reading about Baba and could literally imagine the whole scene like Baba would be talking with devotees, cooking food in big pot, giving Udi to devotees etc. I used to feel how lucky are the people of Shirdi with whom Lord Sainath Maharaj Himself walked around, talked, danced, loved, and scolded them like a mother. While going through one chapter, where Baba gives coin to a devotee to put in the shrine. I told Deva, we are not so lucky that we get a coin from You, just like a son joking with his mother. Now the miracle happens. I live in Australia. After two days, i was at work at a convenience store. An old man enters a store like a normal old man comes to me and flips an old copper coin at me and smiles saying “This is your lucky penny, keep it with you and see what happens”, and then he left without buying anything or saying anything. I was wonder stuck and did not even say thank you. But i thanked Deva for fulfilling my wish. This was like 4 years back and till today the coin is in our shrine, on which i have put Baba’s Photo. This shows how Great is my Deva, He has always given me more than i deserved.

Another experience is about Baba’s Udi. Few days back, my wife came from work. She was feeling uneasy. I was at work, she called me and said that she is not well. I asked her to take some medicine and sleep. When i came home around 10:30 pm, she had very high fever and her body was still paining too much in-spite of the medicine taken 4 hours back. I was about to break down in tears but i never cry in front of anybody except Baba (my Mom) and my own mom. I prayed to Baba and told Baba she should be alright in an hour. You have the power and i completely trust You, i have no refuge other than You Baba and took some Shirdi Udi which we have at home here, applied on her forehead, gave her lemon juice and the medicine once again. With an hour she started feeling well and by next day she was normal as nothing had happened such is the power of His Udi. Just call Him with love and devotion and He will come running to save us from odds. We thanked Baba for His wonderful Leela. Before 2005 my life was like a street dog, no aim in life, no goal but since Baba entered my life, He gave my life a meaning and made me progress in all aspects of life that is socially, spiritually, and financially that means i have got more than i ever expected and i thank Sainath a 100 times in a day every day. Baba please bless all Your devotees and give them strength to fight against odds and never leave them alone. Shri Anantkoti Brahmand Nayak Raajadhiraj Yogiraj Parabrahma Shri Sachidanand Samarth Sadguru Sainath Maharaj Ki Jai.

Anonymous Devotee from Malaysia says: I become Baba devotee since 2012. I was not very particular about religion but things get changed since I know about Baba. I love Baba principles and lessons. My father passed away when I was 5 years old, since then my mother is doing all for me. Today, Baba is my father and Guru to guide me until my last breath. Om Sai Ram. I become Baba devotee when I started working in an organization, where my supervisor was a great devotee of Shirdi Sai Baba. My supervisor have a big Shirdi Sai Baba Picture in the office. Once I started working there, indirectly I began devoted to Baba and regularly go to Sai Baba centre with other colleagues. Once I become Baba devotee, there are a lot of experiences that I had been going through.

I am a devotee of Lord Ganapathy since childhood. One day, I get to know that, we should have a Guru to guide us to the right spiritual ways. So, one fine day I went to temple and prayed to Lord Ganapathy to show me my Guru. When I was on the way to my home, suddenly I saw Baba and Ganapathy statue together in a car and I was quite surprised that Lord Ganapathy answered my prayer immediately. Time elapsed unnoticed. I resigned from the organization and joined other organization. When I was in another company, I faced some environment problem, where I was unable to adapt with the environment. It made me to take decision to look for other job. Within 3 months, I got an offer from another company. Happily, I accepted the offer and everything was going smooth, even though the company was having some management problems. I was not sure what makes me to be apart from Baba and I totally forget about Baba.

Problems began to arise in my personal life and I faced terrible mental tortures. I started to worship Baba truly with my heart and mind. It is proof again that Baba won’t leave His children to suffer. Baba showed His blessing by recovering all my problems. I was in Joyful tears with Baba blessing. After few months later, I had been retrenched from the company due to some financial issues. Again I became unemployed. I cried to Baba a lot and asked what is going to happen in my future. I started to worry about my future and family. I did Sai Baba Vrat (Fasting) and completed, read Baba’s Satcharitra within 2 months. Later I got job nearby my house and the working hours were quite flexible and I was very happy with Baba blessing. Nowadays, the only thing that I am praying to Baba is to forgive all my faults in past, present and future and show me the right path to become Baba’s purely devotee. There are few more experiences I would like to share in future post. Om Sai Ram. Thank You Baba. Om Sai Ram.

Sai Baba Gave Us A New Life-Keep Faith On Him 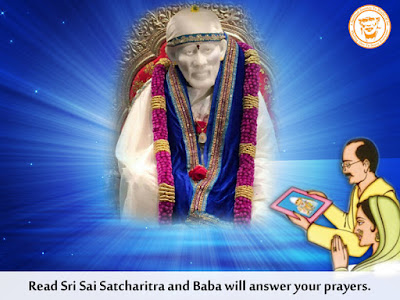 Sai Sister Deepika from India says: I will never forget this incident in my life and was willing to share with you all. How Baba has shown His wonders and miracle in my life. This is just one incident, but I have more miracles in my life. My marriage took place only because of His blessings. I never dreamed about it but have a faith on Him. It took almost 4 years to convince his parents for our marriage. It’s been only 5 months of our marriage and I had to face lot of problems. The big one was, I had a lesion on my lower lip since my 2nd month of marriage life. I had neglected and not even worried about it. Later I started realizing and worried about it with different kinds of thoughts which were badly killing me. I had a thought that it could be a lip/skin cancer.

We both are Sai Baba devotees and always believe in Him. My husband is very supportive and he kept on saying, don’t worry it’s just a bacteria, have faith on Him, everything will be good. But my surrounding were so disturbing and hearing about those kind of incidents, it made me so nervous. Later, we had decided to meet urgent care physician because as we couldn’t able to find appointments here with dermatologist. After meeting physicians they haven’t diagnosed and just simply said it could be a skin cancer. I was totally broken and i even don’t know what should I do and how to lead a married life, started thinking negatively and I used to cry a lot daily but my husband was so strong and he never believed it and keep on saying to have faith on Baba. We have taken other appointment with dermatologist and even they have no idea what it was on my lower lip. They told to do Biopsy, me and my husband decided immediately and did biopsy. It’s a miracle. After 2 weeks we got reports and I was praying to Baba, everything should go normally and there shouldn’t be a cancer. Almighty did it and once again Baba have given a life to me and my husband. It’s just a bacterial infection, now I’m perfectly alright. Always keep faith on Him. Never think negatively. Baba will take care all of us.