Skip to content
Sai Sister Gowri from India says: I am Gowri Oberoi, a homemaker with two children residing in New Delhi. Since childhood I have been an ardent devotee of Baba as my parents introduced Baba to me when I was a baby. My father used to have Sai Bhajans in our and other houses every Thursday to show his devotion towards Baba. He sings very well and so was lovingly called as ‘Bhagavatar’ (someone who sings or says praises of God). My parents are still great devotees of Baba but due to old age problems they are unable to participate in Bhajans etc. I had shared my prayer to Baba on this page some time ago to make my daughter do well in her 12th board exams and read Sai Satcharitra and other Shlokas (religious chants) all the 3 hours when my daughter was writing each of her exams. I had told her you study well and do your best and leave the results to Baba. He will give you the best results more than what you expect. Few days before her exams, my husband took her pencil box with new pens and other tools for writing exam to Shirdi and kept it at Baba’s sacred Samadhi during Darshan for Baba’s blessings and got it back. I also asked my parents and in-laws to buy and give her pens as blessings to write her exam. She carried all the pens and wrote her exam with them. 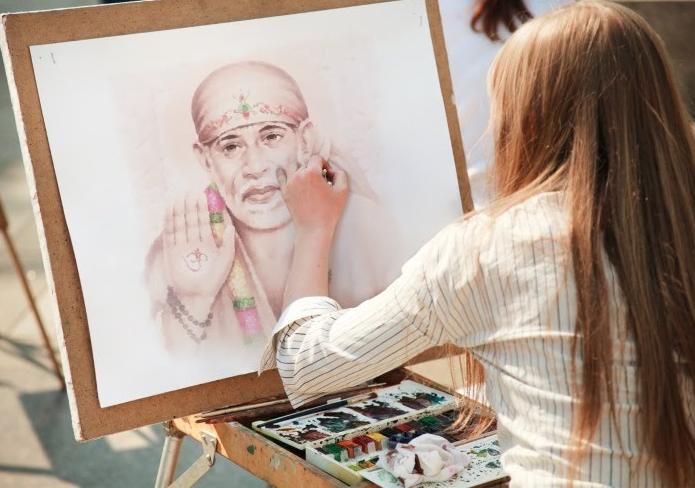 First exam was English and she came back sad saying that she could not write one answer correctly as she didn’t understand the question at all! She had done the rest of the paper perfectly! The question was of 8 marks and she was quite disheartened as she had studied so well. I told her don’t worry ‘Baba will make everything alright. She was still perturbed so I requested Baba to bless my daughter as she had studied really hard all by herself as she had no private tuitions ever in her school years whereas most of her friends had. Even though we could afford tuitions, we didn’t want her to take tuitions as we wanted her to study herself so her brain can become sharp and she understands everything instead of being spoon fed. Her school’s seniors were also against any private tuitions. Her school Director had once told all the parents that it would be like giving ‘crutches’ to our children to walk by giving tuitions to them instead of teaching them how walk/study themselves. This stuck in my husband’s and my mind and we never gave her any tuition and only taught her how to study and acquire knowledge herself.

To my surprise, that evening, my husband’s office colleague, whose wife is an English teacher, asked my husband which question paper set number my daughter got. When my husband told him the number, he told my husband that his wife had set that paper and the set which my daughter got had a wrong question and whoever attempted the question would get full marks from the Board! I was so happy and told my daughter see how Baba didn’t let your hard work go waste and you attempted that question even though it didn’t make sense and so you will get the full marks. The same thing happened with another subject and in the same manner Baba helped again as the question she was doubtful about was wrong and her school teacher assured her that she would get the full marks for that question as she had attempted it. Then in the end of the month of May, the results were to be declared. We were holidaying abroad at that time and I was praying to Baba that the results should not come when we are abroad and should only be declared on 29th May, which is a Thursday and also we would be back home by then.

One night in the hotel in my sleep I got a dream and I saw my daughter’s mark sheet containing her result. I saw in the first two subjects in that she had got 95% and the third subject’s marks were blurred and then the fourth subject again she had got 95%. I didn’t believe it as she had so far even in 10th not got such a high score so I just told them I saw the results and did not reveal the percentages I saw so that she is not disappointed if those numbers don’t come true. I myself didn’t think this would come true. I messaged my friend in India about result date and she replied that results are expected on 26th. I got a little tensed as we were still abroad and were returning only on the 28th. But Baba is very kind and upon returning, we saw in TV news that the results would come only on the 29th. On 29th morning, I made 50 vegetable sandwiches and gave to an old age home nearby and asked the seniors to bless my daughter as she is going to step into a new phase in her life. During my prayers, I told Baba that whatever results He has given my daughter, we would accept gladly as that would be the best for her.

Exactly at 11 am, my daughter checked the results online and guess what? My dream had come true. In the first two subjects she had got 95% and also in the 4th subject. Exactly the way I saw in my dream. Her aggregate was 94.8 which was totally unexpected. Baba had given us all such a wonderful surprise and un-measurable joy. I and my daughter got overwhelmed and couldn’t control our tears of joy. It was a feeling we both had never experienced before. It was Baba Who has given her such an amazing result. I immediately went and thanked Baba. My daughter’s hard work, combined with Baba’s blessings had paid off. Jai ho Baba Ki. I had no doubts about Baba’s abundant love and this was yet another experience to prove that He is there, yes He is there very close to us and listens to each and every prayer and thought of ours. I love You so much Baba. You are my everything. Thanks millions and millions Baba. Please continue to be with all of Your devotees at all times and transform all of us into joyous beings so that we do not have any desires and tread the path of enlightenment. Om Sai Ram