Anonymous Devotee from UK says: I live in UK and have been Sai daughter when I was 13 yrs of age. I then left His hand and now have held it again this time forever. Few months ago I found out that I had a big cyst on my right ovary, Doctors here advised they will need to do operation as my blood test were also not normal and they may have to remove my right ovary as you can imagine I was in a lot of stress I would cry just thinking about it. My faith in Baba was going and as it was Navratri. I started praying to Maa Durga day and night. One day my baby fell ill so I had to take a day off but that day my sis in law called me after hearing about my situation and spoke to me (she is also Baba devotee) she told me that she noticed my faith in Baba has gone down and wanted to speak to me since some time but not had chance and not to do that but to trust Him. I was just crying on the phone. She told me that hold Baba’s hands He will make it all ok. She told me to read Sai Bavni and His 11 promises twice a day. 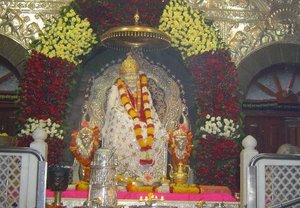 So slowly I started to get my faith back in Him. On Ram Navami at work I had a thought to do likit Jaap, so I brought a notebook and started on same day. A few days before my operation I had a dream that the Doctor was doing operation and I saw that there was blood squirting everywhere and I was shouting saying i am not go 1st am go 2nd. Then I woke up remembering all dreams but ignored it. On the day of operation I had only managed to do 108 pages of my likit Jaap and prayed to Baba that’s all in His hand now. I went hospital with my hubby and when the anesthist came and saw me having a cold he refused to do the operation even my gynaecologist said they can’t do it as may have complications as I have cold. Me and my hubby literally begged to say do it as I wanted it all to be over but we were sent home and booked in after 2 weeks, all my family were stressed and told me that it my fault I had cold as all I did was cry. A few days before my operation I had dream again that I went for operation and all the medical staff was calm and peaceful in theatre with the operation team. After 2 weeks I finished my likit Jaap a day before operation, on the day of operation I still had mild cold but the new anesthist did not seem bothered and I had mild cold and I had new gynaecologist as well. I spoke to him that if there is any way they can save my ovary then please do as the other gynaecologist said he will have to remove it, the new gynaecologist I had that day was very nice and understanding and wanted to help me. So he said that instead of keyhole surgery which was planned by last doctor he would do open surgery that way he can see how my ovary is and save it if possible as my cyst was quite big he was worried it may pop if they did keyhole, so I agreed.

After my operation, I woke up and my hubby came to me saying all went well, cyst removed and they managed to save my ovary a little bit as well. I was so happy that Baba heard me and saved me, as if I had the operation 1st time it may have not gone well as my dream showed, all test came back normal but found out they found some endometriosis in cyst, again I was stressed. I came back home after 2 days and started my likit Jaap again and did 4 Saptah Parayan of Sai Satcharitra back to back. I found out my result all came back clear but they did confirm endometriosis. It may come back at some point I don’t know but Doctor gave me all clear to go. I know may be because of my karma they found endometriosis and am not angry with Baba, but I do know this that Baba helped me out, and now He is testing my faith in Him to see how long I will hold His hand for, but I have told Baba that in the past my faith has come and gone and I have left His hand few times that probably why I went through 3 stressful months, but now I have held His hand and not letting go, as by holding His hand. He will guide us on a path without thorns but if we leave His hand all we see if thorns. I just wanted to tell all that don’t leave His hand, if we do we will get thorns and problems in our way, but if we hold His hand He may test us but hold on tight because then He will not let any thorns come out way.

Also another miracle, couple weeks ago I saw Udi on Baba Photo in my temple, my hubby being Nastik he said it may have been done by one of us by accident to my baby but I said no way as the Udi on Picture does not show any finger print also if it was done by us it would have fallen off the picture as picture is standing. I know this was Baba miracle giving me blessing and what more happiness can I have that am sharing it on Baba day with you all & I got Baba Udi from Shirdi in the post today as well sent from my Mum If I missed anything Baba please forgive me. Love You Baba.

Anonymous Devotee from India says: I knew Baba from my childhood. I don’t know exactly when i get close to our Baba. I used to attend our Baba’s Pooja in my childhood that was held in my friend’s house every Friday. But i started experience His Leelas when i was in graduation. I have faced lot of problems in my life, it may be personal or family problems. I used to speak with Baba for small things by standing in front of His garland. Many times i scold Him for not getting the things done according to my wish. I stopped worship Him for sometimes and again praying Him. It happens so many times. I was in rough path of my life. I completed my post graduation and there after went to overseas for doing MS. I left my studies in the middle and returned to India due to personal problems. I was trying for job in India and was not succeeded for many years.

Baba Is Always With Me In Every Step Of My Life

Anonymous Devotee from Singapore says: I am Devotee of Sai from my 10th standard. I used to read His stories from my 15 years of age. I believed and trusted Him and always i used to chant Sai. With His blessing i have very good and happy family. Thanks to Baba. I got a good job and i married to such a nice person. After marriage we shifted to another country and lead very nice life and with His grace i got a good job. We are actually planning to buy a house over there but we could not and we always postpone. Last January i went to India for delivery, at that time my aunt told about Guru Bardwaj yaga. Everybody has to complete Baba Parayanam 11 times before April 2014. Miracles happened to me after i started. My Normal delivery (we might think what is in this but these days in India everybody undergoing c-section). We have healthy and cutest baby gal. Another happiest thing is we bought a house which we are planning to buy from last 2 years that too with reasonable and house is lovely too. My husband project suddenly got ended and they gave time of 6 months to get another project and he got place in another project with in short time.