Baba Cured My Husband’s Health And Mine Also

Anonymous Devotee from India says: I am a devotee of Baba since my childhood. Co-incidentally I went to an astrologer who predicted bad future for my husband’s health. He predicted that my husband would get depression and things can go worst and even he predicted that my husband already suffered this problem in past. I was shocked as my husband has gone through this problem in past. Now I was worried day and night I was thinking what to do. After few days I meet my mom’s best friend who is a great devotee of Sai Baba. She only showed me the path of Baba when I was in my childhood. I don’t know what happened to me I Shared all things with her and cried a lot. She told me one thing Sai Baba is with you and nothing will happen bad to your husband. To Baba’s blessing she introduced to a astrologer to me who suggested crystal healing for my husband which would help him gain confidence and positivity. 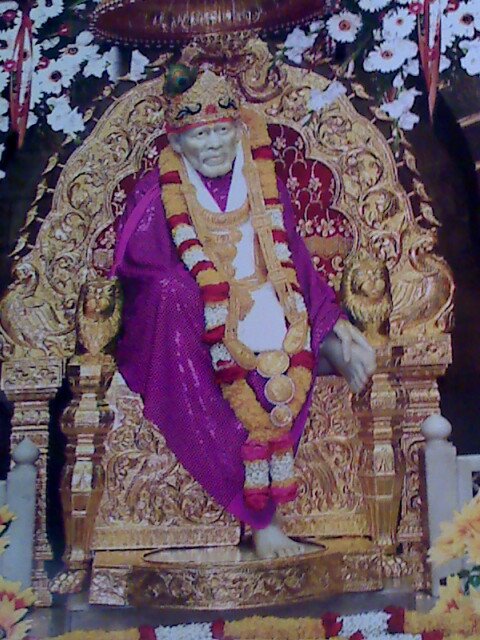 Since these healings were going on, I became ill and was in depression because of my husband’s worry. I was always praying to Baba that makes me well. I always use to ask questions to Sai Baba on internet and use to follow steps which Baba told me. Through His grace I got well by mixing Udi in water, Baba told me to light lamps in temple I did it. He told me to offer orange colour cloth as soon as I did all this things I got well and my husband healing were also successful and today by Baba’s grace I am living a happy life. It’s just because of Baba’s blessing. I and my husband are alright as my health condition was such bad that I was trying to take appointment from a psychiatric but here also whenever I try to take appointment the doctor was not available this is Baba’s blessing as He doesn’t want me to take medicine. He cured me. I am very happy. Sai is always with us. I love my Sai.

There is one more miracle which I want to share. I have a son. He is 2yrs old. Before some time he got ill and he got fever of 101-102. This continued for 2 days even I was giving him medicine then also he was still not well and was very cranky. I heard a voice that I should give him Udi. I applied Udi on his forehead and on his tongue that was Wednesday and prayed to Baba that he should get alright by next day. To my amaze after some time my son felt better and he did not have any fever on that night and next day on Thursday he was feeling better and got well. Thanks to Sai Baba He really takes care of His children

Sai Saved Our Family From Accident

Anonymous Devotee from India says: I am a Sai devotee for the past four years. Sai was showing many miracles to me. Out of those this one which i am sharing is very important in my life as He saved my family from major accident. Myself, my son and my parents were travelling from Malaysia to Chennai on April 16th 2014 in flight # Air Asia evening flight which used to star from 4 and reaches here by Indian time 5.10 Pm. We all reached airport and finished all the immigration process and we were waiting for the boarding call and finally we boarded the flight. All the other passengers also got boarded the flight and the air hostess closed the door and we were waiting for the flight to start. But suddenly the pilot said we all need to wait for fifteen to twenty minutes as there is some minor problem in Engine and technicians has to come and get it repaired.

In the mean time my son started running here and there in the flight and he is one and half year old. He was not at all listening to my words to hold him. I kept my phone which is locked in my seat and started going back on my son. The technicians were working on the problem in engine. The same process happened for forty five minutes. Suddenly my husband ranged from his office, so i attended the call and gone again to my son. When i returned the phone got fell down suddenly and it suddenly opened the Baba’s picture and His message came as Sai Blessings Is There For You And For Your Family. I don’t know how it opened when the phone is locked. Immediately air hostess said we cannot fly in this flight as this is not in flying condition. If we go in this we may tend to get accident and flight would have got fire. We all passengers moved to the other flight and we reached safely to Chennai. We truly believe that Baba is there to protect His devotees in critical situations. I started crying by seeing His message in my mobile and i don’t know how it opened with that message as my phone gets locked in three seconds as my son used to put it down so we used to lock it. My Baba is there always to protect in the entire situation. Now again Baba knows how critical situation i am going He will come to protect all His devotees i believe.

Anonymous Devotee from USA says: I am a Sai devotee from USA. I have loved my Sai for many years now, but really started worshipping Him since the past one year. I have promised my Baba that I will share my feelings and experiences here with you Sai Bhaktas. The past one year was really tough for both me and my husband. We lost three of our loved ones within a year. A friend had given me Sai Satcharitra and after six months of grieving I started reading it. With every chapter my faith increased even more and helped me to come to some terms with the events in our lives. Another friend just casually mentioned that she attended the afternoon Aarti at our local temple and I was intrigued. I have been going to this Madhyanah Aarti for two months now and look forward to Thursday eagerly. There were some other issues with my daughter going on, and every time I sat in front of the beautiful Sai Baba Murti, I felt a calm coming over me and Baba telling me that everything is going to be ok, just have some patience. I sincerely believe my friends were sent as messengers of my Sai to help me during this difficult period. I cannot imagine my day and in fact my life without my Baba. I still have a long way to go, sometimes I still question my God, but He very patiently guides me. Om Sai Ram