Skip to content
Anonymous Devotee from USA says: Om Sai Ram. Please Do Not Disclose My Name or Email Id. I would like to thank all the team members including Hetal ji, Anil Gupta ji, and Rana Gill ji who run this website and “Sai Baba Miracles” Facebook page for spreading the name and Leelas of Baba ji throughout the world. I came under the wings of Sai Baba ji in November 2013 when I was going through some personal problems. One of my cousins had liked one of the experiences posted on the Facebook page and it showed up on my News Feed. I was going through very rough time and although I don’t recall the experience now, it gave me a ray of hope. Earlier the idea of praying to a human being seemed bizarre to me. I always thought people who proclaim themselves to be God like to be a fraud and people who prayed to them as crazy. But as it is evident by numerous devotees’ experiences that when Baba wants He pulls us toward Him and open our eyes. Before this, I had never even heard the name “Sai Baba” or anything about Him. It is only due to the hard work of all the member of team doing this noble work and all the devotees who shared their experiences that I got introduced to my Baba ji. Both sad and happy experiences of devotees have become a source of strength, lessons, and hope for me. My problems are yet to be resolved but with Baba ji’s grace maybe I will share that miracle with all of you once it happens. Please do not disclose my name or email id. 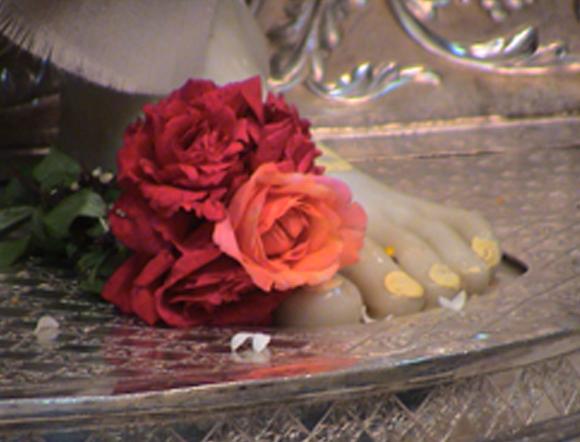 Here I want to share how Baba ji listened to my prayers and blessed my grandfather with good health. I had decided to post my experience if everything goes fine with my grandfather but due to my laziness and other things, it was getting delayed for past couple of weeks. Today, April 28th, I clicked on today’s experience but somehow the post of September 22nd, 2012 opened up. I decided to read it and after the first experience, I thought that I should finish writing my experience too and submit it. To my surprise, second experience was a post about how devotee’s grandmother health problem cleared due to Baba ji’s blessing. I understood that Baba ji telling me to finish what I had promised. I pray to Baba ji to please help me write about His Leelas and blessings in my life. My paternal grandfather is 93 years old and lives in India. Earlier he would frequent us in US every six months but due to his age now, he has stopped. In October 2013, my mother went to visit him and she found out that his hip needed surgery. Although he was resistant, she succeeded in convincing him to undergo hip replacement surgery. By Baba ji’s grace, both the surgery and recovery went well.

In February 2014, he started to get sick and although everyone tried to get him to move around, he wouldn’t go out much and would stay on his bed for long hours due to which he developed bedsore. Around the same time, there was some issue with his hip again, for which doctor prescribed some shots and later suggested surgery for the second hip as well. Then on March 14th 2014, we got a call from India that my grandfather has been admitted to ICU since he has been vomiting a lot and have severe diarrhea. It seemed to everyone that he may not survive. I was crying and prayed to Baba ji to please make him recover soon and give him healthy, long life. I decided to keep 9 weeks Thursday Sai Vrat and to do one week Sai Satcharitra Parayan. In the evening, I went to Sai Baba Temple and did a prayer for his quick recovery. I had faith in Baba ji that He would make my grandfather healthy soon. Since I was already in the middle of doing 9 week Sai Vrat, I could not start the Vrat for my grandfather till March 27th, but I started the Satcharitra Parayan on Thursday, March 20th. Nobody in my family believes in Sai Baba, so I knew they would laugh at me if I would tell them to give my grandfather some Udi. I recalled reading an experience where a father started drinking Udi on behalf of his child and it helped in his child recovery and similar incident is also mentioned in Satcharitra where by invoking Baba ji’s aid Nanasaheb Chandorkar take up some dust from the road and put it on his wife’s forehead to heal a devotee suffering from bubonic plague and from that very moment that devotee started recovering. I have a habit of putting Udi on my forehead after prayers and also drinking it with water.

From the day my grandfather got sick, I always told Baba ji that I am putting this Udi on my forehead and drinking it on behalf of my grandfather and he should be the one to get benefit of it. I also started putting Udi on my grandfather picture and placed an Udi packet on his picture. For first few days of initial admittance to the hospital, there was not much improvement in his condition and we were all very worried. However, by Baba ji’s grace, he eventually started to get better, vomiting also stopped, and they moved him form ICU to General Ward. Due to the bedsore, doctor decided to keep him at the hospital so proper care can be taken there. After I finished my Parayan on Wednesday, March 26th, I called India and I was told that he has been brought back home and is doing much better. I was very happy and thankful to Baba ji as he had accepted my prayers and my Parayan. However, his bedsore was still there and was hurting him. It can usually takes weeks to months before bedsore is completely gone but given my grandfather age and his weak immune system, we did not know how much longer it would take. Due to this, his second hip surgery was also getting delayed. But again by Baba ji’s blessing, only in few days bedsore was cleared and soon after he went through hip replacement surgery which was again successful.

Now, he is waiting to get all the stitches out and will then start physiotherapy. I pray to Baba ji to not give him much pain through this process as he is very old and lack the strength to withstand this much physical discomfort. Whatever I have asked Baba ji, He has fulfilled it even when I had lost all the hope. However, the biggest problem of my life is yet to be resolved and I request you all to please pray for me to Baba ji to resolve that issue too so I can be happy again. Meanwhile, please Baba ji bless me with Faith & Patience. Sri Satchidhanandha Sadguru Sainath Maharaj Ki Jai. Om Sai Ram