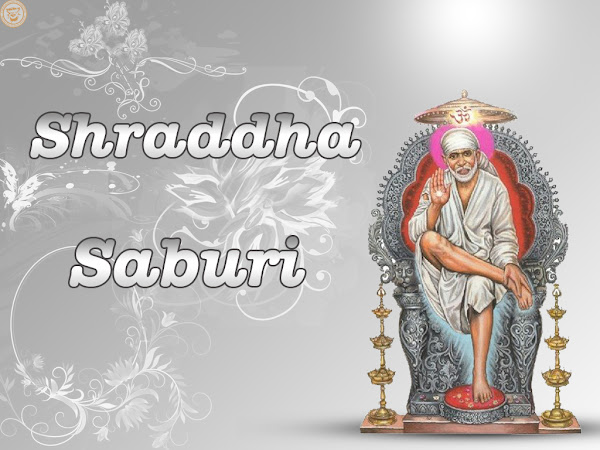 Anonymous devotee from India says: I am doing my masters right now in the UK and that is definitely because of Shri Sadguru Sai. Om Sai Ram. I came in contact with Baba three years back through a best friend of mine. It’s very strange because we were friends for three years but she told me only in the fourth year of our friendship. She gave me the Sai Satcharitra Book and asked me to read it daily and she said everything will go well after that. I was a great believer in God but really had no clue about the existence of Shri Sadguru Sai Baba, Who is now my sole protector. I adhered to what she said and actually started reading it chapter by chapter and sometime page by page. What I am going to narrate now is something what made me believe strongly in Sai Baba’s existence.

I probably did not know what crying was until the day I met this guy. I was someone who was always scared of commitments and hence ran away from even speaking to men with the fear that I might end up falling for the wrong ones. But destiny had it for me as I fell for this strange guy during work and that’s where the definition of terror seemed more pronounced in my life. He proposed to me like after 15 days of knowing each other. I don’t know but yes I was attracted to him in a certain way. I did not know what love was but I thought I was in love. It started off well like all relationships do in the beginning but after a year the actual journey on the rough road began. He started behaving weird in every possible way. He had once said I am Lord Lakshmi in his life and the next time onwards I only heard him abuse me and call me a slave. I had gotten very serious about him after the first year and he started to take me for granted. I was scared of losing him because in my knowledge he was my first love and I thought I should do everything to retain this relationship. He started using very harsh words and he started saying he will be with me if I am his slave. I don’t know how and why but I did listen to him and got treated that way.

I used to cry everyday to Baba asking Him to change the guy and make him treat me good. He also believed in Baba a lot and we even went to Baba’s Temple most of the Thursdays. I started believing him more because he was a Sai devotee but I was only being innocent I guess. He was very cruel and harsh. He sometimes went to the extent of cursing my family. At one point I even started feeling I might have to break up but when I spoke of breaking up he use to abuse me more and speak ill about me. So I decided this is my life and started living with it. I cried every day, I don’t remember a single day for 1.5 years that I haven’t cried, and almost every day I cried till 1am or 2am in the morning and then went to sleep. I even remember times when Sai Baba came in my dream and comforted me making me sleep on His lap. I use to confide everything to Baba and just go on. But somewhere, I did not want to lose him because it had been 2.5 years and I thought whether pain or gain I should not leave him. But I now feel he was prepared to ditch me because suddenly he left Bangalore and moved to his town and he said he was shifting so that he can talk to his parents about me and take me with him soon. I don’t know why but I believed him and after all this I was still prepared to be a slave and get tortured but I just wanted to be with him.

But, after he went there he changed, he changed to an extent where he never called me for weeks and when he spoke, he only abused me. Somehow two months after he left I convinced him to speak to his parents before I leave India as I was planning for my higher studies abroad. I even stopped praying, going to temple and said I would only go once his family accepts me. I never expected even in my dreams that Baba would let me down but yes he said his parents are not accepting me and he just left. If that was it, it would be fine but he insulted me saying that I am not beautiful and that’s why they don’t want me. This was unacceptable. I completely broke down on hearing this. Someone who ran behind me for a year saying I was the most beautiful girl just said I am not good looking and left. I was devastated to such an extent that I even was planning to cancel doing my higher studies. He broke up with me just before my Visa interview. Even after all this I attended my interview because there was a voice in my head that always told me “it shall pass” but your education should not be given up for the sake of anyone.

I was so dejected and I hated Baba because I thought He would help me and not give up on me but strangely He gave up on me and that’s what I thought then. I ran behind him for days, weeks and then two months after break up still called him as a small ray of hope but he turned out to be a crook. I was left in a state of dismay but strangely I never attempted for suicide. To be frank I had attempted for it when he was there in my life. After he left I cried, I was upset and even probably in a state of depression but never lost hope and now guys I proudly would say the strength was Sai Baba, the voice in my head was none other than Baba. It is said in the Sai Satcharitra book that one has to suffer his deeds of the past and even God can’t help him out because it’s Karma. It’s been almost seven months now and I am so grateful that the guy even came into my life because I learnt so much. Even though he left before my Visa interview as I mentioned, I went ahead and came for my studies. Staying alone made me strong, independent and gave me the superior power that a woman should have. I had lost self-respect and almost everything because I wanted to be with someone who treated me like a slave. Now I realise how important this life given to us is. I met people who taught me different things. I learnt how important family is and how they stood by me through thick and thin. I strongly believe that Karma is something one has to go through but with Baba holding your hands the dangers are comparatively less.

With personal experience I must say that I believe in the sentence “Sai Baba will do what is best for His devotees” but it’s unusual that people believe this or consider this because all of us only believe in what’s happening in the present and we curse God when we have problems and forget Him when we are happy. It’s human to remember God in times of trouble but we forget that it’s also human to appreciate and thank him for having protected us in the past. I would request all of you reading this to recall your past may be one incident at least where you feel you cursed God but today you feel it happened for the best. I bet, all of you will be able to recall one such situation. I am not saying I am very happy after he left. I still cry, I have other problems if you all think he was my only problem but Sai Baba is there with me to take care and I believe He will do what is best for me. These eight months were definitely tough but I am still there, writing this for all of you to read and learn that everyone goes through bad times but remember “it shall pass”. Your dreams will definitely take over the reality but remember they can be controlled and that can be done by doing “Namjapp” of Sai Baba. Om Sai Sai. Bow to Shri Sai, Peace be to all.