Sai Baba Blessed My Brother With The Best Job

Anonymous Devotee from India says: Please do not disclose my identity. I am a devotee of Sai Maa for almost 8 years now. I was introduced to Sai by one of my friend. Initially i just used to pay a visit to Sai temple as i used to do in the other temples. Years passed and later when i was in London, i first experienced Sai Maa’s miracle. My faith on Sai Maa increased then, and i became ardent devotee of Sai Maa. I have a younger brother who had finished his B.tech from NIT and joined a company. He was not happy with the work culture there and he could hardly manage for 6 months. Later he quit job with the hope that he can find another job since he is from NIT and had very good percentile. He started searching for jobs but nothing was appropriate for his profile he found. He was quiet disappointed and planned to do MBA in IIT. He appeared for CAT but couldn’t come up with a satisfactory score. He started feeling emotionally weak.

In the mean time i underwent a surgery and my health went down, so i couldn’t pay attention towards his career. He attended the off campus interviews but the results were negative. Since i was operated and was staying in Pune, he came down to Pune to look after me. I was bed ridden for couple of months and meanwhile i used to pray Baba to get him a job. My parents were also worried about his job and were being little weak as relatives and friends used to ask my parents about my brother’s job. One Thursday when my brother went to a super market to get me some fruits and vegetables, he met one of his senior who is working in the very best consulting company. My brother told him about his situation and the friend asked my brother to forward his resume. He did and luckily my brother’s resume was shortlisted. He was called for a written round and it was on Saturday. The company is at a walk able distance from my house. He did attend the written round and got selected. The other 2-3 rounds for final selection were on the falling Thursday. He didn’t have much hope that he will clear the final round as the similar situations happened with him for other companies. But i had a hope that Baba will help him to clear the interview as it was on Thursday.

With less hopes, my brother prepared for the remaining rounds. Finally Thursday arrived. On the day i did Pooja and offered grapes and guava to Baba. I applied Udi on my brother’s forehead and started reading Sai Satcharitra, but was bounded with fear that if my brother loses this interview, then he will be emotionally weak again. But Sai Maa was giving me hope. After every round my brother used to call me to inform the results and i was scared to receive the call fearing to hear the negative results. It was 3 pm when my brother called me after final round of interview and i was looking at Sai Maa’s Photo. He said that he couldn’t make it through. For the moment i got a severe shock thinking of my brother and i was speechless. After 15 seconds when my brother did not hear my voice, he said “Yahoo… Sister i got selected and I proudly say that i became a member of ZS ASSOCIATES family”. My joy knew no bounds and for the coincidence at the same time my father was distributing sweets in Sai Mandir. Even my parent’s joy knew no bounds. A very big day and a very happy day which i can never forget. My brother has on boarded the company this week and he is very happy about his job. Sai Maa i will promise to be Your devotee till my last breath. You have helped me in each and every phase of my life. I pray You to help and bless each and every devotee of You on this earth. Be with us always and bless all of us Baba i pray You that “SARVE JANA SUKHINO BHAVANTU” (meaning: I want to see all people from various religions to be happy) Ananta Koti Brahmand Nayak Raajadhiraj Yogi Raj Par Brahma Shri Sachidanand Sadguru Sai Nath Maharaj Ki Jai. Om Sai Ram

Sai Baba’s Blessings And Grace In My Life 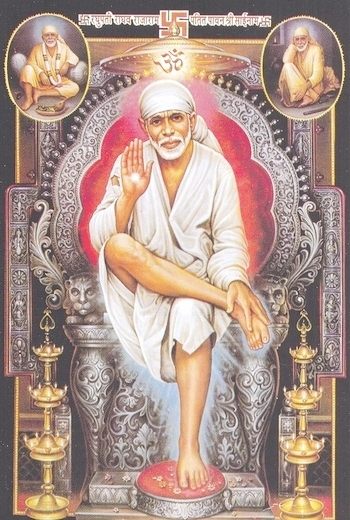 Sai Sister Swati from India says: My name is Swati. I became a devotee of Sai Baba a couple of months ago when He miraculously came in my life through my sister, who is also a staunch devotee of Sai Baba. I would like to share two very small incidents that took place yesterday and today and I thought those would be worth sharing.

I went out with my friends yesterday for some shopping and we spent the whole day hopping from one mall to the other and were extremely tired. So we decided to take a cab while going back home and we reached the cab station, none of the cabs were ready to go. We all were exhausted and I started praying to Baba that “please help me Baba, do something. I am exhausted and can’t stand even for 5 more minutes”. I am currently on antibiotics and therefore was already very weak inside and just went out for shopping on my friend’s insistence. To my sheer surprise, all of a sudden a cab came and agreed to ride us back home. As I entered the cab, I saw Baba’s Picture pasted on the front glass of the cab. I was delighted. Not only did Baba answer to my prayers but also He did make sure that me and my friend is guided back to home safely. Baba’s miracles are astonishing. I thank Him for considering me worthy enough to preach Him and think of Him day and night. Bless everyone with Your grace my Lord. Love You. Om Sai Ram! Hare Krishna!

Anonymous Devotee from Australia says: Om Sai Ram. First of all I would like to thank the admin for creating such a beautiful blog. It’s a great platform for all the Sai devotees across the country to share all their love and grace of Shri Sai Baba through their experience. I follow this blog daily. It gives me goose bumps whenever I read the miracles of Our Baba. I am from Australia. I am an ardent devotee of Sai Baba since childhood. I know that He is always there with me in my good and bad times and will continue to be there till my end.

I am going to share my experience that I had recently. I was doing Sai Nav Guruvar Vrat and on the first Thursday of the Vrat, I prayed Baba that before I finish my Vrat You should (Baba) come to my house in the form of Idol or Udi and bless me. I was not sure how this is going to happen but I firmly believed that Baba will come and bless me. Back in India my dad applied for a job in one of the prestigious company and was waiting for the results. He attended his interview which was on Thursday and by Baba’s grace he got the job. My dad decided that he will visit Shirdi before he starts his new job. He told me that he was going to Shirdi. I told him that I want Udi from Shirdi and asked him to look for a Baba’s Marble Idol and tell me how much it would cost. I never asked him to buy because I know it is not safe to courier any sort of fragile things especially like Idols from India to Australia as they may break. My dad had a great Darshan and returned back and told me that he bought Sai Baba’s Idol and posted it to Australia along with 2 Udi packets. I was not sure whether he did the right thing but was feeling happy.

On the other hand I was bit anxious because I was not sure whether the Udi packets will reach me or not. The custom officers check everything in the customs and might take away the Udi packets thinking it might be some sort of drugs. Before my 7 Thursday, I received my parcel containing Baba’s Idol and Udi. The custom officers didn’t take out the Udi packets even though they opened the parcel and checked. My happiness knew no bounds. I had tears in my eyes. As per my wish Baba Himself came from Shiridi to Australia to bless me and my whole family. He used my dad to full fill my wish. I love You Baba. I am truly blessed. Sakalam Sarvam Shri Sai Natharpanamasthu. Peace to be all. Stay blessed.