How Baba Reached My Friends House A Day Before Dussehra

Anonymous Devotee from Australia says: First of all, I bow to Shri Sai for having His grace on me and my family. Baba, You have been with me through thick & thin and have always shown Your presence when I called upon You. Thank You for all that You have given to us. Please bless us with more faith and patience Baba. I have had very heart touching experiences with Baba some of which I have shared on this blog. Today I am sharing my recent experience wherein Baba chose me to be a source to reach one of His Devotee. Please forgive me Baba if I go wrong somewhere in the post and pardon me for the delay in post. 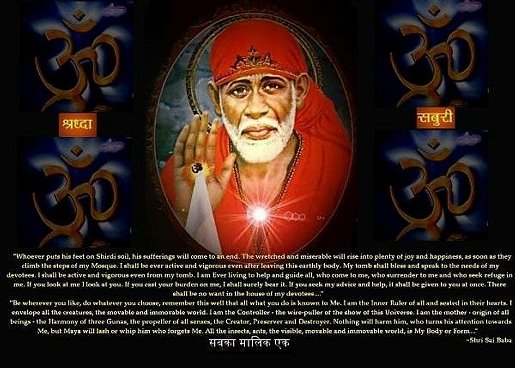 I am in Melbourne (Australia). I have a very close friend here. Once she mentioned to me that she is looking for Sai Baba’s Statue for her home temple. I suggested her that when she is buying one, she should look for Baba’s facial expressions. She then said that probably I would be able to buy a good statue for her. So she entrusted this work to me. I took it as another grace of Baba and thanked Him to choose me for this job. I searched at many shops and asked many people whom I knew were Baba’s followers and might know from where I could get Baba’s Statue. All I could find was Baba’s Photos but no Statues. I wanted to present Baba’s Statue to my friend on Dussehra Day.

The day was approaching and I was losing hope to get one on time. This made me sad. As you all know, Baba never lets His followers down. It was Friday and I got late at work. When I reached station, it was being announced that the trains on my route were cancelled. My husband works in a suburb so I couldn’t call him to pick me up. The only alternative for me was to catch a tram and reach a suburb near mine. My husband said he would pick me up from there. As I got into the tram, I thought I should have Baba’s Darshan on my way as tram passes through that area. I couldn’t resist myself and called my husband telling him to come to the temple as I would be attending Shej Aarti.

Now see what Baba had planned for me. When I reached temple, there was still some time for Shej Aarti. So I sat in front of Baba and was having His Darshan to my heart’s content. There I saw a couple whom I have seen their many times. I don’t know what made me walk up to the gentleman. We started talking. He told me that they got late today as normally they attend Dhoop Aarti on Fridays. I told him I was a bit early for Shej Aarti. Probably Baba wanted us to meet. During our conversation, I asked if he knew any shop which has Baba’s Statue. I told him about my desire to gift the Statue to my friend on Dussehra Day. The guy immediately called a number and talked to the person on other end in Gujarati. After finishing the call he said I can find Baba’s Statue in one of the shops he enquired. He gave me the address. I could have never ever be able to think of that shop as the place is very far from my home and I have never been to that suburb. The next day me & my husband visited the shop and out of many beautiful Statues, I bought one which I liked and was able to gift it to my friend a day before Dussehra. This is how Baba reached His Devotee’s home on the day He chose. His ways are unique and so are His Leelas. I pray to Him to always shower His love on His Devotees and show them the right path. Om Sai Nathay Namah.

Anonymous Devotee from India says: Hello Hetal ji, Om Sai Ram. Please don’t post my name and email id. This is follow up experience to make all aware that Sai will definitely give what we deserve. For me it took 2 years. Om Sai Ram, Om Sai Ram.

Sai Baba will give you what you deserve and when you exactly deserve it. I am the guy who posted the story http://www.shirdisaibabaexperiences.org/2012/02/sai-baba-brings-back-my-love-two-times.html. After posting my story here I got lots of helping hands and Sai Baba will definitely bless them all. It’s too late to post but it’s better to be late than never. My story was posted on 14 Feb 2012 at Valentine’s Day due to Sai Baba’s Grace. After posting my story, I got my job on 19th March 2012, but my love problem was not being solved. Her family members were not ready for marriage. On Sai Baba’s Question and answer, I got the answer that your work will be done by your mother. At that time I was not able to understand the answer. But after 2 months (In June) my mother was ready for our marriage and she also agreed my father and they went her home for our marriage. Output was not great but we did break the ice.

After this on 5th of July, I went her home with my family and tried to convince them and they asked us for some time to think but no one was ready for our marriage. Due to Sai Baba’s Grace her Jija-ji helped her and tried to talk with her family. In between we got helping hand of Sai in the form of a person, with the help of him we could talk each other whenever it was required. On December 2012 when I was returning from Shirdi, I got her call that her family would not be ready for our marriage but I told her to wait for 2 more months as my increment was about to done. In month of January, she got the dream in which Sai Baba was saying that Why fear when I am here. Finally in month of February she told her family that she will leave her house and would go with me. Finally their family members were ready and on 2 March we got married at Arya Samaj and with the Grace of Sai and help of all my friends and prayers of all devotees whom I met here. I got what I deserved after waiting for 2 years. Thank You Sai Baba. Thank you Hetal ji and thank you all for helping me. Om Sai Ram.

Anonymous Devotee from India says: I am a Sai devotee. I am married and have a son. Om Sai Ram. Baba blesses us all. I am a Baba devotee from India. Please don’t disclose my identity. I am under Baba’s shelter for almost 7 years but was not an adhere follower of Baba.

I got married to a very nice guy in 2008 and have a very sweet baby boy by the Blessings of my Mata and Sai. One day my 2 year old baby fell off from 6 ft. of height and he was bleeding from mouth and nose. I took him to the nearby hospital, but the doctors told us it’s a small cut in nose, his right eye was swell and we took him to a bigger hospital, there they told us to go for CT Scan, but my baby was in so much pain. He was crying continuously (writing this I still have tears in my eyes, can’t forget that day). Doctors ask us to give anaesthesia, to make him sleep, but we were not ready for it. We have tried everything to make him sleep, but he was not sleeping. Then my mother told me to apply Udi on the affected area. I went home, brought UDI and apply it to my baby and he slept within 5 min and CT scan was done successfully. We were wholeheartedly praying for the reports but it came negative, saying my baby has fracture under his eye bone. But by Baba’s grace, senior consultant told us not to worry as he is a very small baby and it will cure on its own within a month and he just gave him pain killers. I am so thankful to Baba, He save my baby from such a big problem.

Another miracle It was my sister’s wedding 3 months back. I returned to my home after marriage and when I was unpacking my stuff, I got to know that I have lost one of my earring. I was searching for it like anything. I prayed to Baba a lot. I had Shraddha and Saburi that i will get back my earring. One morning I saw a dream that I got my earring back, since then I had full faith on Baba and surrender everything to Baba. Today is the day, I got my earring back and that too itself is a Miracle and I am here writing my experience by Baba’s Blessings. Sorry for the long post. Thank You so much Baba for there with me and my family. Please please please Baba always be there for us. Shower Your Love and Affection to all Your children. Baba You know we are a bit tensed these days, but i am sure You will solve it in Your own way. Love You Baba. Sachidanand Sadguru Sainath Maharaj Ki Jai. Om Sai Ram.