Sai Sister Anita Ji from India says: I am Anita Sharma. I live in Jodhpur, Rajasthan. I am a teacher in a school. I have done MBA. Om Sai Ram. Thanks a lot Hetal Ji for running this blog as it is very helpful for people like us, who spend their days in reading experiences here. Once I have been at Shirdi in August 2011, that time I went with my cousin to visit Mumbai only and she took me with her at Shirdi. I went there just like any other temple, because till that time I was not aware about Sai Baba. After coming from Shirdi I joined a school for teaching. 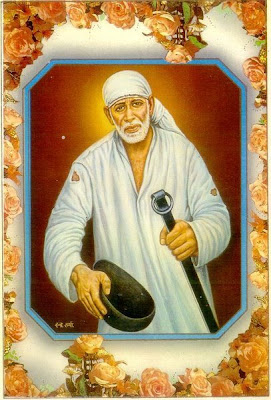 Here I am sharing my experience with Sai Baba. I started believing Sai Baba since Sept 2012. In August 2012, a proposal came for me. After meeting the boy, I did not like him. But his family was very known with my family and maternal. My parents were searching for me since long and the boy and his family said yes for me as they saw me. I said no again and again for that proposal but no one was listening to me. I cried day and night.

My parents and relatives started pressuring me. I was not having much time as my parents were planning for engagement and all. All these things started on 28 August and my life became hell. I was sharing my problems only with my friends at school. My best friend was also in the same school. We planned so many things to solve my problem, but all in vain. Boy’s mother got stuck with my family. I thought I will commit suicide if I will get engaged with that boy. It all happened within a week.

I called one of my friends. She is Sai devotee. Everyone in my school knew it very well. I called up her and said you believe in your Sai Baba, then pray and light a deepak and ask Him to solve my problem and commit 9 Thursday fast without salt from my side. She did so. that day was perhaps Sunday. Venue and Menu were about to finalise and cards also for engagement. I did everything to cancel it. Even I did acting of illness, but same result. My maternal place was next door to that boy’s maternal place, so my mother knew that boy’s mother since childhood. I requested so many times my parents to take some time for this, but they were not ready to listen anything about that matter.

My father started sending a boy behind me whenever or wherever I was going during that time. No one in this world could have helped me at that point of time other then Sai Baba. After calling my friend (Sai devotee), when Thursday came, boy’s mother called my mother and said that she will come tomorrow for “Roka”. I was out in market that day and my mother was at my maternal place. As I reached home in evening, I saw my father a bit upset and my mother was crying. I didn’t know what happened at my back. My maternal uncle came and they all were talking about “Roka” to cancel it. My mother said no for roka and that’s why father was upset and my maternal uncle came for discussing how to say no to boy’s family. When I came to know that my problem got solved without doing anything I just cried and cried thinking and thanking Sai Baba for this miracle.

That day was lucky Thursday. Since that day till now I only believe in Sai Baba. It was that level of problem that no one can solve and it got solved like this. My mother said no for this. None of my friends believe that my mother herself refused for engagement. I know only one thing that Sai Baba changed the mind of my mother. He is the only savior for me. It was a miracle for my life. Most of the teachers at my school are Sai devotee. After this miracle my other friends as well started believing Sai Baba. Till that Thursday, I have experienced so many miracles. He can do anything. Nothing is impossible for our Sai Baba. Just have faith in Him. Sai Baba will solve your all problems. Om Sai Ram.

Hello All, My Colleague and her husband have been married since last seven years and they have no children till then. They did lot of pujas and prayers in India, but still no use. They moved to USA four years back due to their jobs. They consulted various doctors initially, but nothing worked. But finally due to BABA’S Grace and Blessings after undergoing advanced treatments, which involves lot of pain and money, she became pregnant with TWIN Pregnancy. Everyone was very happy to hear such a sweet news after seven years of marriage.

Currently she is in her fifth month of her pregnancy and unfortunately one of the babies has been miscarried and also doctors were not sure about the other baby currently. Heart Beat is fine for the other baby. But still it is very critical period now and doctors said only after twenty three weeks passed, they can take any action. We are all are very disappointed now and feeling very sad about her condition. As far as I know, she never hurts anyone or talks bad of anyone or did any bad to others. She is a very good BABA devotee. She always used to say that only due to BABA’S grace, I have become pregnant and I will treat my two kids as BABA’s kids only. But it was very unfortunate to hear such news suddenly. I don’t know what to do currently except to surrender to BABA and seek His presence and blessings to my colleague. I Kindly request all for your blessings for her. OM SAI RAM. OM SAI RAM. OM SAI RAM .

Change Of My Life

Anonymous Devotee from India says: I am Sai Devotee from Chennai, age 22 completed my engineering just now and started working in a software company. Till last year I have never prayed to Sai Baba. Last year I was in my final year. In my 6th semester, I had 5 arrears, and even before that I had many arrears. I never thought that I will complete my arrear. I started writing Sai Baba’s name 101 times daily, and what happened is in my 7th semester I had only one arrear. And the same happened in final semester. I wrote Sai Baba name, prayed Him a lot and cleared that one arrear also.

During exam hall, I wrote Sai Baba in the desk. I never thought I will get a job in Software industry. I thought of working in BPO. But even in BPO, I didn’t get a job. I used to go daily for interviews, then at last got selected in a software company. But I should not have arrear while joining, but my final semester results were not out. So I was very much sad, but at my joining date my results came. Yes I cleared with Sai baba’s help. Still He is helping me. Last year no one respected me, and now everything changed. My name changed. Everything is because of Sai Baba. Thank You Sai Baba. I know, till my death I will be happy, and it will happen to me because of You.