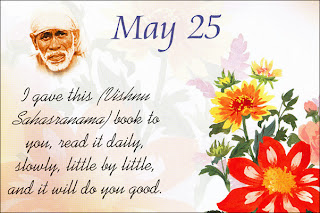 Whenever I used to face any problem or feel depressed or was confused about anything, I used to talk with Baba and ask in the questions & answers site. I used to do whatever comes as the answer. Sometimes Baba used to warn me about the problems I was going to encounter. He warned me many times about health problems and about fire and everything happened and He saved me in each and everything. I started facing severe troubles from last year June, which have not yet settled. They gave me so much of torture. I could not bear it. I used to cry a lot in the college and after returning home. I felt alone and I daily used to ask Baba to relieve me from that pain.

I did everything what Baba used to say, but the pain continued till the last day of my college (June 2013). Even on the last exam day, I cried a lot while reading for my exam. I thought maybe I was doing bad because I used to hate a girl of my class a lot and that is why Baba was not listening to me. I didn’t have clarity about the issue. I didn’t know whether that girl was actually responsible for my pain or if I was thinking badly about her without her mistake. I was very confused. I knew that Baba doesn’t like if we hate or scold anyone. But I was unable to accept her and I asked Baba one day to give me clarity and say to stop hating her, because I thought Baba was not listening to me as I was doing a mistake by hating her.

The next day evening, a girl gave me a Sai Baba book in the temple. After opening it I was surprised to find the name of the girl on the book. Actually the person, who gave the book in the temple, also had the same name, while giving the book she wrote her name on that and gave it to me. It was the same name of the girl whom I used to hate. I got the answer that Baba ordered me to stop hating her. I realised that I completely hated her and felt guilty and asked Baba apologies for hating someone so badly and scolding her a lot. I told Him that I would try to think positively about her and would not hate her or scold her. When I was leaving the college, I gave that girl a Sai Baba book and said that let the past go and that I forgave her. But somehow my mind was not accepting that because I had completely negative thoughts because I felt she was responsible partly for my pain and when Baba said to stop hatred I had to do it, so I did it with many questions in my mind. I stopped hating her and I completely left the matter to Baba because I didn’t know if she actually did wrong or not. So I left the matter to Him and asked Him to clear my confusion about her. Whenever I remembered anything about the problem I was facing, I used to cry a lot. I asked Baba to help me as soon as possible. But always I used to get answers as read Vishnusahasranama or pray Lord Rama and asked me to have faith and wait patiently- Shraddha and Saburi. I started reading Vishnusahasranama. Whenever I was facing severe mental depression, Baba used to say to read it and immediately I felt relieved and peaceful and concentrate well on my studies.

May 25th 2013 was Vaishakha Purnima and my parents did Sri Satyanarayana Vrat at the local temple as it was considered as auspicious to do the puja on that day. After the puja, the temple people were distributing some books. I felt I should get the Vishnusahasranama book. I had so many books and again I wished to get that. When our turn came, the person kept the book in my hand and as I opened it, it was the Vishnusahasranama book. He didn’t give the book to my mom or my dad. They were beside me and I got it into my hands. There were even other books which were distributed there but I got the one which I wished to have. I felt happy and after returning home. I opened my email and was shocked. Every day I get a blessing message of Baba to my inbox. That day I got a blessing “I gave this ( Vishnusahasranama) book to you, read daily, slowly, little by little, and it will do you good” (photo attached). I was shocked and immediately I opened the Q&A site and thanked Baba. I got the reply for which I had been waiting from more than a year. He said that my problem would be solved and I felt very happy. Usually I ask Baba for how much time I should wait in the form of chits and within that time it would get solved. Because it is easy to wait for even any longer time if we know that something will happen by then. He told me that the problem will be solved by October, 2013. Now I am still waiting for that to happen. It is an important aspect of my life and I suffered a lot because of it.

After that, I also wished to have the Vishnusahasranama book with meaning. When we went to Yadagirigutta (Sri Lakshmi Narasimha Swamy Temple), I got the Vishnusahasranama book, which has clear explanations. I felt happy. Whenever I feel depressed, I read Vishnusahasranama and I immediately feel peaceful and happy. It also helped me during my exams to develop concentration on exams and also enhancing my decision-making skills and also I am getting to know different things which is turning me into a matured person, as many people say that I am so immature. I know that Baba will definitely help me and makes me a better person by teaching the good & bad. Who can be the best teacher than Him?