Skip to content
Anonymous Devotee from UK says: Namaste Hetal Ji. Please accept my heartfelt felicitations to you and your team of devotees, who selflessly facilitate this platform to share Sai Baba’s causeless mercy and instill faith and hope in the hearts of many budding and seasoned devotees universally. I am a Sai Ki Beti from UK and would prefer to be anonymous. I hail from Mumbai. I would like to share two experiences where I felt that Baba guided me lovingly at every step. 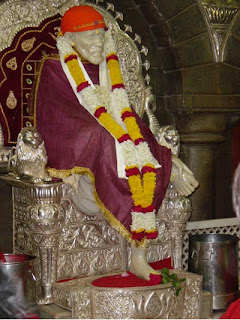 I would like to share my experience about how Baba guided regarding what visa to apply for. I was with an accountant discussing some things to be submitted etc when the topic of my visa application came up. I was actually thinking of applying for a shorter term visa, once my visa expired in November and then once I had it, I was going to apply for the long term visa.
This man is a Muslim and suddenly started talking about some friend of his, who is also a Muslim and kept saying “Sai” “Sai” conversationally 2-3 times (like Sindhi speaking people say) and then proceeded to tell me that I should go for the long term one and not go for the extension. As I thought it was so strange he said “Sai” a few times and then regarding my visa. I took this to be Sai’s message and did so. It took me 7 and half months of agonizing wait and many difficulties, but finally I was granted my visa.

Baba arranged that I visit Mumbai in June immediately after I got my visa. My train ticket booked by my relative for me and I and left for Shirdi immediately next day by night train from Mumbai. I reached Shirdi station next early morning by sharing a rickshaw with a family from the station and landed near the Sai Baba Mandir. I had come on my own and had no accommodation booking made. I wanted to take an economical, but reasonably clean room and also that it would be great if I didn’t have to walk too much for Darshan at the main Samadhi Mandir (I had a problem because of which my legs get swollen if I strain too much for too long).

There were agents for different hotels/ accommodation hovering around asking if I needed a place. I was a little apprehensive and wanted to be careful. I randomly answered them saying that friend is waiting for me and has made arrangements. I made a little round of Dwarkamai, Chavadi and I saw a young girl on the steps at Chavadi. I spoke to her and asked her if she knew any reliable place to stay as I was on my own and she mentioned a name and showed me the direction. I got a little confused over the name and ended up going in circles for half an hour without any luck. I walked from the lane opposite to the Chavadi, to the main road back to the Darshan gates and was tired and confused and so came back to the Chavadi. Luckily the girl was still there and took me with her to the place, which was quite close to the Mandir, Dwarkamai and Chavadi.

As I was very tired, I bathed, ate something, rested and went for a Darshan. If you go to the Public Relations office with your passport (if you are an NRI), they allow you one Darshan. So I had Darshan of Sainath, during which I recollected what Rutton ji Wadia Seth told Sai when he met Him. I have heard that many people, who are in distress come to see you and you listen to all of them and fulfill their desires, I have come with great hopes that you will fulfill my desires. I also prayed to please give me a glimpse of His devotees who served Him when He was in Shirdi in His Mortal form.

I came out and went to the Vachanalaya to read one chapter of Sai Satcharitra. When I opened, I was surprised and thrilled that the chapter was Ruttonji wadia’s chapter. The same one I was thinking when I was having Darshan. After that, I went to Khandoba temple opposite the Water Tank on the main road. There after having Darshan of Khandoba Raya where Bhakta Mahalasapati first welcomed Sai Baba as “Ya Sai”. There I met the grandson of Mahalasapati Ji, the son of Martand, who is shown as keeping his head in Sai’s lap in the picture with Mahalasapati Ji. I also was guided by Baba to Lakshmi Bai’s Samadhi. When I returned to my accommodation, I found the girl, who met me in the morning. We became friends and she took me to Dwarkamai at night for Shej Aarti. She had been to Shirdi a few times so she said she would show me all what she knows. After the night Aarti at Dwarkamai, she introduced me to an elderly devotee Palluben, who has been in Shirdi for over 40 years and I witnessed a loving playful bantering argument she had with another old lady nearly bent over with age, who was lighting the lamps and cleaning the temple. Palluben serves Baba everyday and assists people, who want to make annadaan offerings to devotees outside Dwarkamai and Chavadi. I felt so privileged to see devotees, who are serving Baba living in Shirdi.

We stayed awake for a while (as she was leaving for Delhi the next morning), talking about all her earlier experiences in Shirdi and how wonderful Baba is. We got up early, went for Kakad Aarti at Dwarkamai, offered oil there, ran inside temple near neem tree, took Baba’s holy water, picked some neem leaves (that flew away while falling from the Holy Neem tree under which Baba sat), stood in line for butter prasad at the UDI counter after Kakad Aarti. all special things I wouldn’t have known. We came back to our room, bathed and left for special Darshan, which I had booked 2 tickets online. We had a very lovely and fulfilling Darshan and then took auto to Panch Mukhi Hanuman Mandir. Then we had a quick breakfast and as she was leaving she realized she made a mistake in thinking that the ticket was from Kopargaon, while it turned out that the ticket was from leaving from a further station Manmad and it would take more than 1.5 hrs to take that train. She hired a cab and rushed, but couldn’t catch the train. She had to wait at the station for the next train to Delhi at 2 p.m. We don’t know why Sai did that, but have faith that it must have been best for her.

I went for afternoon Aarti, which I had booked online earlier. I felt Baba was only looking at me, leaning to see me from the crowd. It was a very intimate feeling as if I was standing like old times in Baba’s durbar. My friend had introduced me to some locals, who prepare Prasad, which we can offer to Baba in Chavadi in a disposable plate and then distribute it to all the devotees outside Chavadi and Dwarkamai. This was a wish I had from long, but didn’t think it would actually be fulfilled so nicely by Sainath’s grace. After annadaan, I was looking for a place to sit and have my lunch, when I saw Picchu iyer’s hotel. I was intrigued as I am a Tamil Brahmin Iyer myself.

I went and in, spoke to the owner asking how a Tamil Iyer came to stay here in Shirdi and has a restaurant as well? He said his father went to Ganeshpuri in the 1940s and Nityanand Swami told him to go to Shirdi and start a restaurant. In those days there were very few people in Shirdi. His mother was a traditional south Indian lady and she would put rangoli (kolam – which are decorative designs put with dried rice flour – like typical tamil ladies) outside the temple every day. One rainy morning , just before waking up, she got a dream where Sai Baba was telling her ‘ I’m feeling very cold, please heat some hot water for my bath, She immediately woke up and heated water up and sent it to temple around kakad Aarti in time for Baba’s snan (bath). Ever since, to this day, every morning after Kakad Aarti, Baba’s snan water goes from their house to temple.

That evening again I did some reading of Sai Satcharitra in Vachanalaya, lit lamps at 7 pm near nanda deep. While evening Aarti was going on inside the main temple (another feature revealed to me by my friend). I offered annadaan late evening and went to sleep. Next morning, Thursday, by 2.30 I stood in line for Kakad Aarti. As it was Thursday, devotees queued up with great faith from previous night and the queue was amazingly long with double lines. Baba’s early morning prayer routine and Darshan was indeed memorable and I thanked Sainath for giving me this opportunity, which I wish to cherish, remember and recall always when I close my eyes. I went back to my room to rest a little, bathe and went to bid Good bye to Baba around 10.30 a.m, took leave of Baba, offered coconuts as prayer in Dwarkamai, did final annadaan outside Chavadi and took Baba’s permission and left Shirdi by bus.

I was happy that Sai Baba allowed me to do annadaan for my mother’s health 3 times – in the afternoon, evening and next day afternoon before I left. Also, the small lie I said to the accommodation agents – that my friend is waiting for me and has made arrangements – was made to come true by Baba. Baba introduced me to His dear devotee, who became my friend and showed me so many places around which as an outsider to Shirdi, I wouldn’t have known. I also got the flavor of His past and present devotees who offer service to Sai and Shirdi. Sai guided me at every step and made my pilgrimage to Shirdi very special. Jai Sainath.