Miracles Of Baba In My Life

Experience1: My mother, around 60 years old, was suddenly fell ill one day and was having very high BP. When I called the doctor, he suggested me all sort of possible bad possibilities and suggested me to admit her in a hospital. When we took her to the hospital and doctor did the checkup. He was surprised to see that by God’s grace she was doing more or less fine. You will not believe, Hetal Ji, all my way to hospital, I was chanting Baba’s name.

Next morning, when I was about to visit my mom again to the hospital, I thought of buying a magazine for her. I was in a hurry and just randomly picked a Bengali magazine and bought it. To my utter surprise, when I properly looked at the cover page, I saw a small picture of Baba on the magazine (in this part of India, people are generally not a Baba devotee), so it was a big surprise. When I just flipped through the pages, I understood that Baba miracles have been mentioned in the book. I gladly took this book and gave it to Baba. This is a very very good experience I had, where Baba made me feel His presence at difficult times. My mother was released from the hospital after few days after few investigations. They have found a kidney problem, but I am sure Baba is there to take care.

Experience2: My husband was having a lot of issue at his work place. The problem became so big that I used to cry every day in front of Baba. One Wednesday I just thought about checking the Question and Answer site, I soon as I thought about my husband’s office problem and entered a number. It said “Your problem will solve in 2 days”. You will not believe that I thought in my mind that by Friday all issues should be resolved, and it was really done on Friday itself. Small issues are still there, but I am sure Baba is there to take care.

Sai As A Cloud 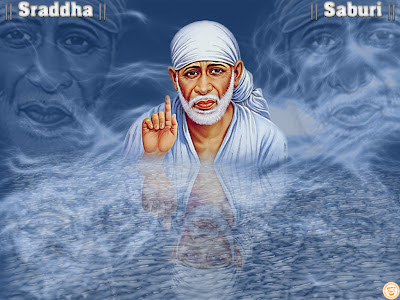 Sai Sister Simi Ji from UK says: I am Sai’s daughter since I can remember. First I knew Him as Krishna, Gopala, Radha, Shiva and then as Matarani and now as Sai. He’s always been my life and I pray He’s always with me even after I leave this body. Jai Sai Ram. I am writing for the first time. I feel Baba’s presence around me every second of the day. I have grown up in a very spiritual environment, where my grandmother and parents did and still do Seva of Krishna and Radha deities.

Sai Baba came into my life in the form of the Sai Satcharitra, which my aunty had blessed at some one’s house, where Baba showered UDI. For some reason, I did not get the book in my possession for a few years and then when I finally got it, I didn’t read it for another year or so. I was going through a very bad time and one day I just started reading it and since that day I have not put it down. Baba helped me through the very very bad patch I was going through. I kept taking His name and felt I would not be able to breathe if I didn’t take His name!

One day as I was walking to work , I was chanting His name as usual and feeling low in myself, when something made me look up in the sky. There He was, Sai Baba’s face in the form of a cloud. It was so beautiful and so detailed I could clearly see His wrinkles, His eyes, His lips and His headgear. I thought I was imagining things so I looked around me to see if anyone else on the street saw what I saw, but everyone was in their own world getting on with their day. I looked up again and there He still was. I will never, till my last breathe, forget Sai Baba’s Darshan and what a beautiful Darshan it was. I kept walking till the cloud image disappeared from my vision. I pray to Him to give me and His other Bhaktas Sakshath Darshan. Just to let you know my problems all got sorted by His grace and I feel His presence by my side always.

Thank You Sai Baba for Your love, Your patience and Your blessings. May we all always stay as the dust under Your feet till the end of time and beyond. Thank You Sai Baba. Love You always by Your grace.

Sai Sister Anusha Ji from India says: It’s a mere bliss to read and listen to Baba’s story and Experiences of Devotees of Baba. It feels still great to experience them in person. I am glad that I got such a chance to share one of my experiences here. It was in 2010, on April 24th, I had to go to get my Driving License. Hence for the same, I had the test. First I had test for four wheeler that I completed successfully. Second was for two wheeler.

I was asked to wait in a queue with my vehicle (2 wheeler). The tests for both two wheelers and four wheelers were taking place simultaneously. As they had asked me to wait, I was waiting with my helmet on. Then all of a sudden I heard some kind of chaos among the crowd. I turned and saw as to what it was. I was so shocked to see that a person who was taking up the four wheeler test got into tension for the same and instead of pressing break, was pressing accelerator and did not know how to control the car and had come out of the track and was approaching the queue of two wheelers. I was much more shocked to know that there was no examiner of that test in that car to control the same.

Car started coming towards me. Before I could realize as to what was happening and could escape from this, the car hit my vehicle and I was dragged along with my vehicle for short distance. I had no ways of escaping then as I was almost stuck in my vehicle, and my vehicle was stuck under the moving car. I felt as if someone held me when all these things were happening and hence the situation did not turn worse and I believe it’s none other than Baba. By Baba’s grace, my parents and few others present there, pulled me carefully while I was still being dragged by that car.

It is nothing but by Baba’s grace that I was not hurt badly when the car just hit my vehicle and I fell and when I was dragged along with my vehicle. Then I was taken to the hospital by the police, who were conducting the tests there. I had a cut in my leg of about an inch and got it stitched. The car was finally stopped by my vehicle, which was stuck below the car. Then by Baba’s grace, my vehicle was brought to proper condition by the person inside the car by getting it serviced, which was by the involvement of the police there. I want to thank Baba for saving my life. Thank You Baba! I prostrate before You. I love You Baba.