Skip to content
Sai Sister Preeti Ji from USA says: Hi Hetal Ji, I am Preeti. This was how my journey with Shirdi Saibaba started. I really appreciate your blogs. I have already posted this experience in the January 2011 edition of “SAMARPAN” magazine. But still I would prefer to post the same in your blog as it would be read by millions of devotees. It would help them to increase their devotion. It is believed that “Shirdi Sai pulls His devotees from distance, even without their knowledge, due to the past life connection” and this exactly happened to me. 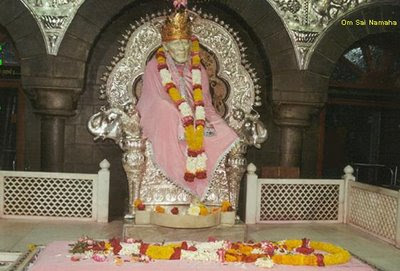 This one is a real time experience in my life. I wanted to share this experience since long time, but somehow kept postponing. It happened during the year 2004 December 26th, when tsunami hit India. I knew Sai Baba and have heard a lot about Him from my relatives, but I was not involved in doing any kind of prayers till almost January 2005.


Basically I am from Chattisgarh, which is very near to Shirdi. My father was a central government employee and was posted in Andaman & Nicobar islands and was at Port Blair (capital of A&N Islands).He worked as a teacher in different islands from 1975 to 2008 and hence we (sisters & brothers) were brought up in A&N islands. When tsunami struck the islands, except for my parents and brothers, we sisters were in Bangalore. Coming to my experience with Baba it so happened that on 26th Dec 2004 (Sunday) at 4.45 – 5 am.

I had a very peculiar dream (I have the habit of getting up early for doing my prayers since my childhood). I saw myself standing near a very huge water body in a village with many people around me with everyone being tensed and sad. On inquiring, I was told that soon a very huge devil will appear from pond and will kill everyone in and around the village and also that there will be a huge destruction of life and property. On hearing this, I was very sad and started crying thinking of my family (as I’ve mentioned that I was away from my family). All of a sudden I saw a tall old figure coming from a distance clad in a white dhoti, kurta and turban. He came near me and told in a very assuring tone – Beta don’t worry, nothing will happen to your family as I am here to save your family. Soon after this conversation I saw a very huge devilish figure arising from pond, which caused a lot of panic in the area. Immediately I saw Baba in a very angry mood shouting and pointing to the devil asking him not to come into that particular area. The devil obeyed his orders and never approached the area.

I got up with a lot of confusion and fear as people say that dreams seen during early morning hours do come true. I was also trying to recognize the person in my dream. I did my daily routine prayers that morning and then by 8 am I got a call from my sister’s husband about the tragedy that struck A&N islands. I was speechless and shocked to hear. Immediately I started calling my parents, but there was no response (due to tsunami all the phone lines were cut off). I kept trying for nearly 1 hour and at last my mother picked the call and told me that only people of that area were saved miraculously, but still the houses were completely destroyed. The houses were partially submerged in sea water. I would like to pin down some points for reader’s consideration:

After this tragedy during my evening walk with my friends, I happened to visit a temple in J.P Nagar, Bangalore in the month of Jan-2005. Guess what? I saw the same person in my dream sitting on the throne, none other than Sai Baba. Since then I started believing in Sai Baba and I’ve been praying Him daily all these years. Sai, bless His devotees. I will post a few of my other experiences sometime soon.