Skip to content
Following experience is very interesting and gives us a nice message.

Anonymous Devotee from USA says: First of all I want to thank Hetal Ji for starting this wonderful blog. Every day when I read it, I feel so happy and connected to Sai Baba. May Baba’s blessing be always with you and other readers. I am a daily reader of your blog and I stay in New Jersey. Though there are many experiences, but I want to narrate my experiences with Sai Baba. 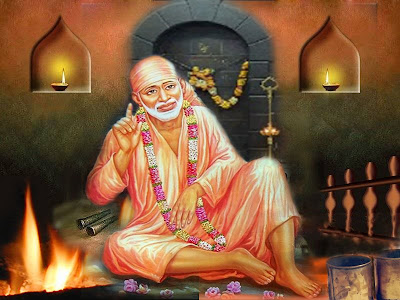 In 2012, we went to India to attend my husband’s cousin sister’s wedding. It came as a surprise that we were allocated rooms in Sai Baba’s Mandir. I was thrilled, but also thought of testing Baba’s presence. I thought, tomorrow morning, when I visit Mandir, if I see Baba and Panditji dressed in orange, I will agree with others that Baba is truly present. As I entered Mandir, I saw Sai Baba dressed in orange, but no where I could see Panditji who offers Prasad. I thought that may be Baba is punishing me by not offering me Prasad through Panditji because I tried to test Him. I was sad and felt bad that I made such a big mistake. Just before leaving the hall of Mandir, I saw that Panditji quickly came and offered me Prasad. I was relieved and felt happy. Not only I got Prasad, but Panditji was also dressed in orange which firmed my faith in Baba Ji.

Same year after attending the wedding we went to Shirdi. At Pune Airport, we hired a taxi and reached our Uncle’s place. Through the night we nicely slept and in morning we started our journey to Shirdi. Our Uncle had provided his car and driver. Hardly had we gone 2-3 miles from home that we got a call from our Uncle that one of us has left our purse at home. My mother in law realized that it was her purse and we all went back to collect the purse. We were all sitting in the car. When we reached home and my husband got down to collect the purse. Then I also told him that we did not even bring the camera, which was in the black bag, please collect the camera too.

We waited more than 5-6 min and he did not return, I thought it should not take that much time. He came running and told me that no where he could see the black bag. I got down and searched the whole house, even I could not find it. That Black bag had “laptop, our passports, our green card, dollars, tickets, important papers, and our house key”. We panicked and started guessing where we left the black bag. We went to airport, checked with authorities and their lost and found section. We could not find our bag. Finally it occurred to us that may be we left in the Taxi. We went to Pre-paid taxi stand. We did not know the name of the driver and also our receipt did not mention the name of driver and taxi number. So no one was able to locate, who the driver was and which taxi it was. My husband’s head was spinning and was feeling very helpless that usually he is very careful, how could he be so forgetful and we lost our most valuable bag. Somebody there at the stand said, that who so ever is the driver will come back within 2 hours to collect his money and start his next shift. For those 2 hours, we were really worried that even if he comes what is the guarantee that he will return our bag. We had no proof against him and we even did not know for sure that if we had left the bag in taxi or somewhere else.

After 2 hours, the driver came and he handed over our bag and it had all our stuff. We were thrilled and appreciated his sincerity. Later I realized that it could be only because of Baba’s blessing that we got our bag back, so I decided that I will offer Rs 1000 at Shirdi. While we were at Shirdi after Darshan, my husband told me that while you thought of Rs 1000 in your mind, I thought of donating $1000. I was like, okay but we do not have that much cash and if we give cheque with dollar amount where the Panditji will go to exchange it. So when we returned to New Jersey, we donated $1000 to Sai Baba Mandir in Iselin. That day I realized that Baba made us realize the importance of donation, giving. Even been blessed with so many things, we had forgotten to donate, but we learnt our lesson and hence forth I always keep this in my mind.