Baba Is Always With Me

Thank you so much Hetal Ji for this beautiful website where devotees can read and grow their faith on Sai Baba. I have been Sai devotee since childhood, but had great faith and belief only after my marriage as my in-laws are staunch devotee of Sai Baba. I have experienced many miracles, but I want to share this specific one because I promised Baba that I will post this one. 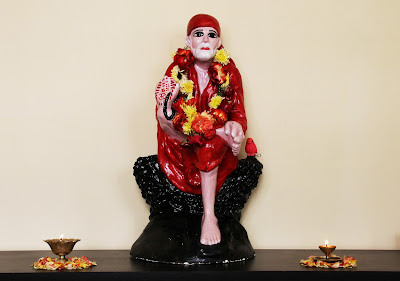 I was driving back to go to get together. The lady’s house, where we were having get together, owes me some money and I was having bad thoughts about her, and suddenly my tire hit the curb and I heard a loud noise (as if Baba was reminding me not to think ill about others). I was so scared, but nothing happened and in fact I drove for about 1/2 mile and I called my husband and asked what I should do. He asked if I feel ok driving. I said “No”. The tire seems to have burst. So I pulled to a gas station. All the time, I was taking Baba’s name. And i was scared as we just had tire replacement and costs lot of money. I prayed to Baba that if tire replacement is done free, I’ll write the post. By God’s grace next morning the dealer told my husband that the tire were covered under road hazard and did not cost anything for tire, but just tax, which was not much. I know it’s a small experience, but since I promised Baba, I wanted to write. This is also my first experience. Baba is always with me and I get lot of strength by reading devotees experiences in this site. Ananta Koti Brahmanda Nayaka Rajadhi Raj.

I’m an Indian girl lives in Kuala Lumpur, Malaysia. I’m married with two kids. I’m a college lecturer. 2 years back, my mom went to India to visit Lord Shirdi Sai Baba’s temple. She bought me His statue. I was not His believer at that time therefore I brought back home and kept it unwrapped. After sometime after watching a video in youtube, I start to condemn about the true existence of Sai Baba. After I question about His existence, my life began to fill with sorrow. I face too many problems. At this point of time, when I was in a bookshop near my house, I saw Lord Shirdi Sai Baba’s picture and then it click to me the reason of all the problems, I had is because of my own act not believing in Him. I quickly went back home and unwrapped the statue my mom bought for me few months back and I fully surrender myself to Him. For a week, day and night, I only think of Him and ask for forgiveness. I kept Him in my praying alter and pray to Him every day and there is only one think I asked ‘Forgiveness’. After a week I was back home from and that’s when the miracle happened. The moment I opened my house door, the whole house smells like heaven. I was wondering why? That’s when I saw His beautiful feet standing on my orange rug on the floor. His feet were white like snow and above His feet was an orange color cloth. My heart stopped and at that moment I know the Lord Himself has came to my home and showed me His feet as a sign that He has forgiven me.

The Happiest Moment Of My Life

Om Sai Ram. I am Sreelakshmi. I am 20 years old now and doing my degree. It was the most awaited day of my life. From childhood itself I have been hearing about Baba from my father and mother. My father is a great devotee of Sai Baba. He used tell Baba’s stories and sings His songs for me and my brother, when we were small. Gradually I developed faith in Baba and started believing in Him. Going to Shirdi and getting Baba’s Darshan was something, which was very important for me. We planned our trip many times, but always due to some reasons it got cancelled. As it says only when Baba wants to see us, we will be able to go there.

Finally the last year, we went to Shirdi. I was very excited that though there was a huge rush, I was ready to wait as long as required to see My Baba. And in the end, when we entered the Mandir, the rush was so much that the security people were not letting anyone stay long and have Darshan. One of them pushed me away from that place that I just felt like crying. I had written “Sai Ram” 108 times on a paper to give there, but had to put it in the Bhandaram there. I was very upset that after waiting for so many years, I couldn’t see Him properly, but still I was satisfied that I could at least go to Shirdi, which was like my dream come true. But the same day, we went once again in the evening to have Darshan. The rush was not as much as in the morning. We went inside. I was standing write in front of the Idol. I had my eyes closed and my hands opened held together. Suddenly a bunch of flowers fell onto my hands. I was shocked to see it. May be some Pujari would have thrown from inside, but I felt like it was Baba, who gave me those flowers. None of them, who came with got even a single flower. I was so happy that its just beyond words. I love You Baba. Love You a lot. Please be with me always .

That was the worst day of my life. Everything was going very smoothly till then. Suddenly I got horrible stomach ache and started vomiting so badly that I neither could sit nor could sleep. My parents took me to hospital and the doctor diagnosed and said I have a cyst in my stomach, which has grown to such an extent that it has reached its maximum. They advised me an immediate surgery. We all were extremely tensed and worried. Just before I entered the operation theater, my mother told me to keep thinking about Baba in your mind. He will take care of you. When I was brought back to the post operative ward, my father came and told me that right after my surgery that he received a message from one of the Sai Trusts. The message went like this: Sai Baba says “since you have secured my protection, I will cross even seven seas to come and protect you”. I was shocked to hear that from my father. That incident made my trust in Baba even deeper than ever before.